These carnivals and parades express Catalonia’s long history and distinct culture, while also showing the contemporary spirit of Barcelona and its knack for throwing a memorable party.

Catalans are fiercely proud of the language, culture, and history that distinguish this autonomous region from the rest of Spain, and Barcelona’s year-round processions, parades, and parties are vivid displays of those distinct Catalan traditions. From the time-honored Carnestoltes (Carnival) festivities that take place near the end of winter, to the 24-hour party crowds of the summer’s festes majors, it’s hard to miss the teetering processions of papier-mâché gegants i capgrossos (giants and big heads), which are made by rival guilds and respectively paraded by a geganter (giant carrier) or worn over the head and shoulders.

Equally striking is the correfoc, or “fire-run,” a devilish outdoor performance that is believed to be able to banish demons. The ritual involves diabolically dressed participants wielding pitchforks and lighting off fireworks. Seasoned locals don protective clothing and engage with the fiery performers in the streets, but we recommend keeping a safe distance. Many of these practices have their roots in Roman Catholic traditions and Catalan folklore, and the latter gave rise to the centuries-old, UNESCO-protected castells—human towers that reach up to 10 levels high. Be sure to also be on the lookout for the circular sardana dance. This custom originated in Catalonia’s Empordá region, and the live music, Estrella Damm lager, and heaving buffets of local specialties fuel every Catalan celebration.

Welcome the kings at Epiphany - January 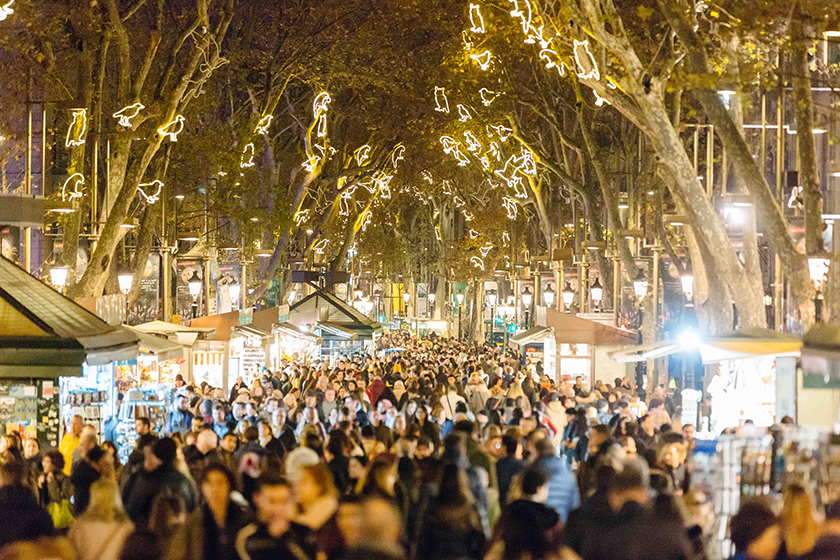 The most important date of the Christmas period in Spain, the day when gifts are given, is Epiphany on January 6th. The previous evening sees the Cabalgata de Reyes (Three Kings Parade), when a costumed trio throws sweets to children from regal floats. Instead of stockings, hopeful children leave straw-stuffed shoes out, water for the kings’ camels, and a letter to Father Christmas. The day itself, which marks the end of Barcelona’s festive holiday, ends with a feast featuring a Roscón de Reyes cake.

A last party before Lent at Carnival – February/March

Francisco Franco may have outlawed this masked festival, but for centuries Barcelonians have thrown a joyous week of parades and parties to usher in the abstinences of Lent and Holy Week. Key parts of the celebration, which take place the week before Ash Wednesday, include the communal banquets of Dijous Gras (Fat Thursday), parades to mark the Carnival King’s arrival, a messy orange-throwing battle, and a masked ball. In the Catalan town of Sitges, black-clad drag queens join a closing procession to mourn the death of the party-personifying Carnival King.

However, you’re just as likely to receive a book instead of a rose during the celebration, as World Book Day is celebrated during the festival, as well. Expect to find bookstalls, signings, and readings being performed, as they’ve become a regular feature of the festival. 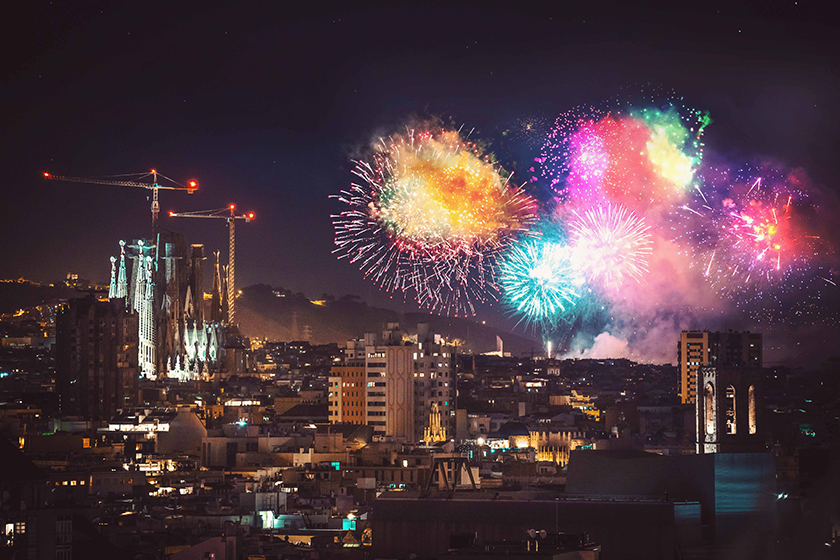 The sky above Barcelona fills with fireworks during the all-night celebrations of the summer solstice and Saint John the Baptist’s birthday on June 23rd, followed by a public holiday to allow residents to catch up on their sleep. Seaside Barceloneta’s beaches are fuller during this time than what you might expect on a typical summer Sunday. The sands are teaming with parties held outside the local beach bars, while the Old Town’s streets fill with revelers of their own. The fireworks supposedly banish demons, and Barceloneta hosts a famous correfoc (fire run), featuring pitchfork- and firework-wielding devils and monsters.

The festes majors or “big parties” that descend on Barcelona’s neighborhoods and surrounding towns are a rowdy cross between a carnival and a music festival, with Catalan traditions adding a strong bit of local flavor. They’re an excellent opportunity to see fiery correfocs, hair-raising castells and sardana dances, as well as parades of papier-mâché giants in the street. Some of the liveliest events take place in August, including the Festa de Sant Roc in the Gothic Quarter and the Festa Major de Sants.

Barcelona’s cool Gràcia neighborhood, home to 19th-century boulevards, fashionable boutiques, and Gaudí’s Parc Güell, hosts the widely acknowledged highlight of the festa calendar. Beginning on Assumption Day, the week-long festival pulls out all the stops, with around 20 streets and plazas resembling a multicolored cave, thanks to the competitive residents’ themed displays of banners, banting, papier-mâché sculptures, and more. It’s a surreal setting for the beloved street party, which dates to 1817 and managed to survive the oppressive Franco era.

In classic Catalan fashion, Barcelona’s city-wide festa began as a celebration of the Roman Catholic feast day of La Mare de Déu de la Mercè (Our Lady of Mercy), with carnival-esque elements later added to one of Europe’s largest street festivals. Held over a few days around September 24th, the festival fills parks and plazas across town with installations, markets and food fairs, while the avenues showcase street theatre and parades of towering gegants i capgrossos. These days, catching some live music is a popular part of celebration, thanks to the concerts in the BAM (Barcelona Acció Musical) and Més Música programs.