From Gaudí’s geometric gems to local markets bursting with Catalonia’s seasonal produce, we share the experiences that should be on every visitor’s to-do list

With its bustling quarters, world-famous museums, and otherworldly Gaudí landmarks, your first trip to Barcelona can be every bit overwhelming as it is exhilarating. Having a bit of local knowledge is key to making the most of your time in this enchanting destination. From the big-name attractions to some of the more under-the-radar sights, this guide is here to help you explore both sides of the city.

Lizards and mosaics at Park Güell 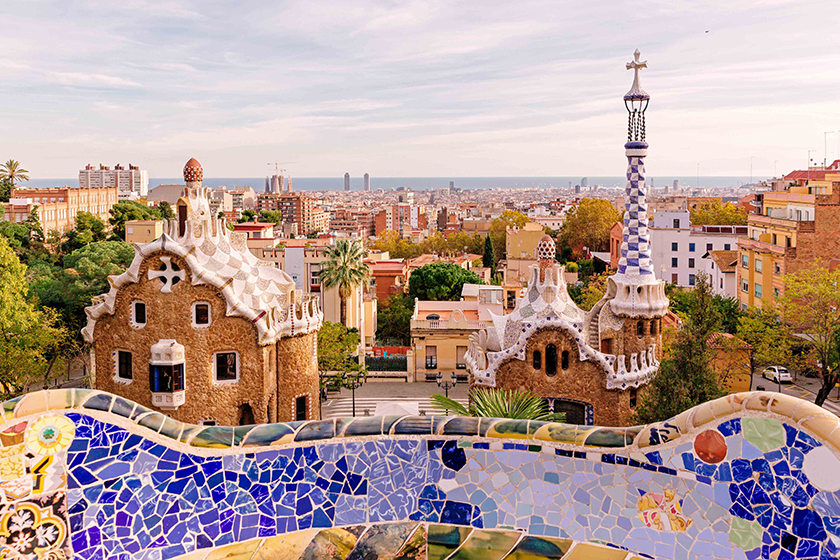 Few architects have made an impression on a city as profound as the one left by Catalonian native Antoni Gaudí.

In fact, seven of his creations are designated UNESCO World Heritage sites—all of which can be found within the city limits. Defined by organic shapes and haphazard ornamentation, and rooted in Gaudí’s Catalan heritage and Catholic faith, the city’s Park Güell is perhaps the best and most well-known example of his work.

The location was chosen for its views out to sea, but the immediate surroundings are just as awe-inspiring, as the park is nothing short of a free-flowing wonder full of geometric precision. You can get in for free, but it’s worth buying a ticket to access the full experience. For only a few euros, your ticket will get you into the park’s most famous spots, including The Dragon Stairway and Nature Square. parkguell.barcelona

Insider tip: Book in advance and ensure you’re on time for your allotted slot: there are no concessions made to those who arrive later than the designated time on their ticket.

Head to the sea 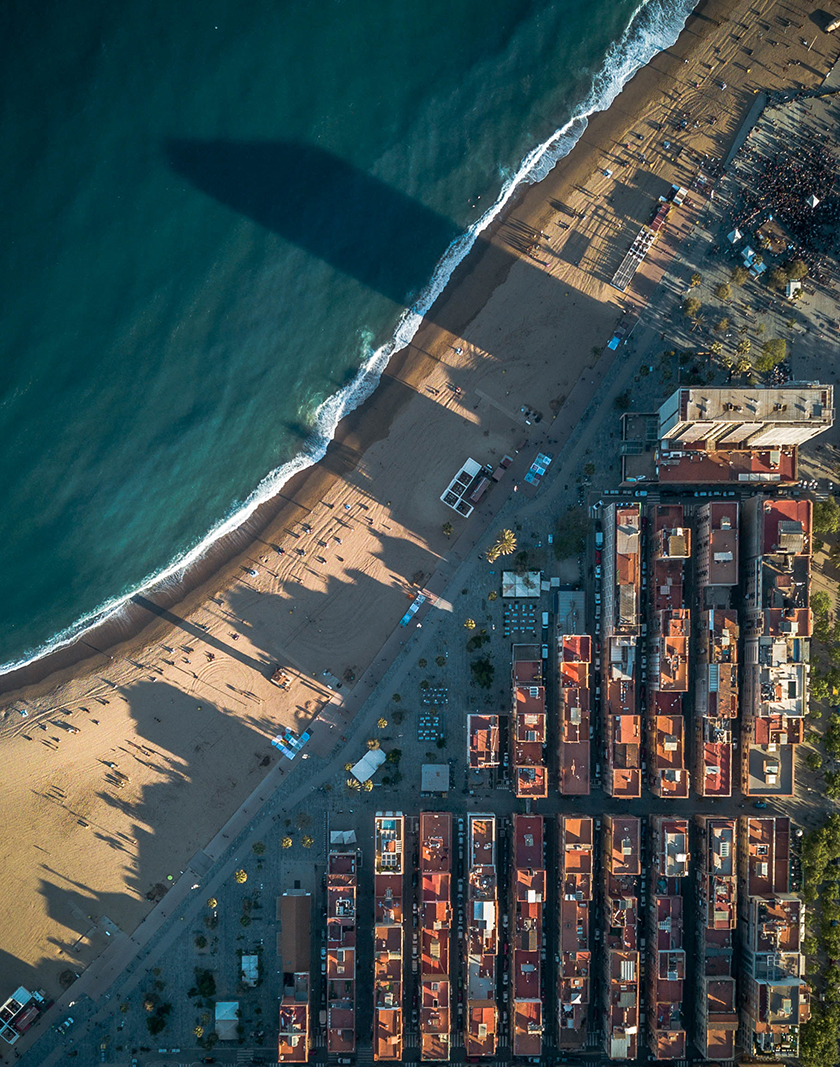 There’s no better place to relax than the shores of the Mediterranean. The ribbon of honey-colored sand runs from the port in the north to the quiet beaches of the south—a local favorite.

Given its proximity to the city, most people will flock to the parasol-dotted sands of Barceloneta Beach. The man-made stretch of sand is backed by a promenade full of Hawaiian palm trees and xiringuitos (beach bars). Its high energy is great for a group of friends, but for something more family-friendly, lay your towel and unpack your picnic at the edge of the warm, shallow waters of Nova Icària Beach, which is overseen by lifeguards and even has table tennis and volleyball to keep the kids busy.

Insider tip: For a quieter day of sunbathing, hop on the train at Barcelona-Sants station for a 20-minute journey to the beaches of Castelldefels. It’s typically easy to find a spacious spot on the crescent-shaped bay.

The spires of the Sagrada Família 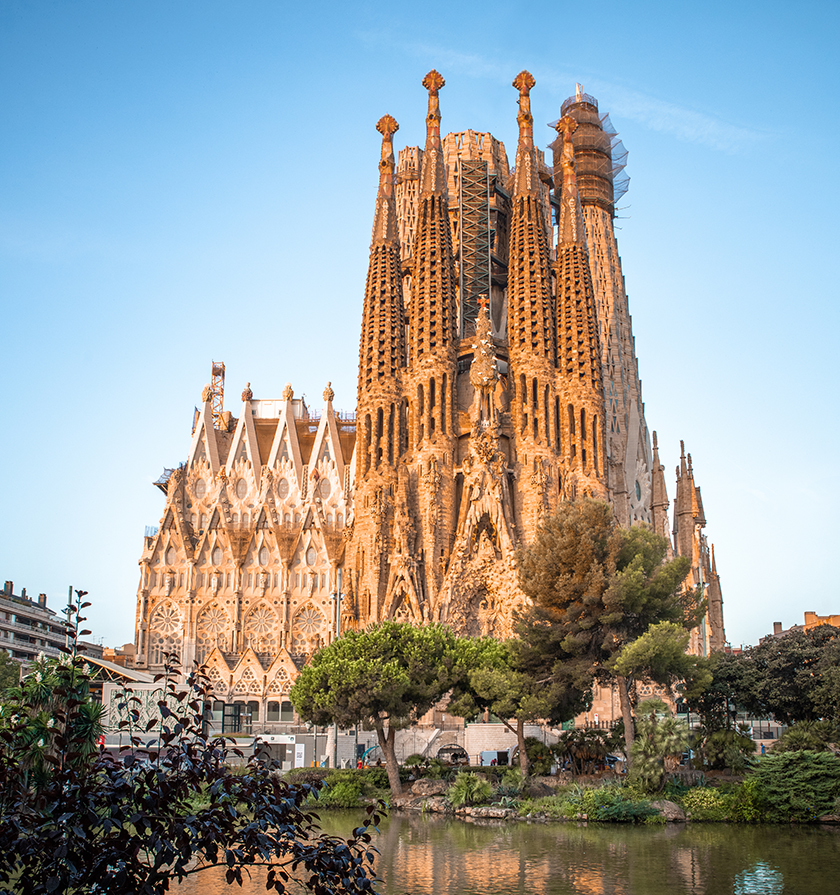 Famously unfinished despite construction beginning in 1882, the Basílica de la Sagrada Família is currently expected to be complete around 2030. Despite being a work in progress for well over a hundred years, this should be near the top of every traveler’s list, as the basilica’s unique melding of gothic and art nouveau styles must be witnessed in person to truly be appreciated. sagradafamilia.org

Insider tip: As you might expect, demand for tickets is high and you often need to book days in advance.

Step back in time in Barri Gotic

Despite its name, and the fact it encompasses elements of the old Roman wall and several medieval buildings, much of the Gothic Quarter’s external appearance only dates back to the 19th and 20th centuries. However, that doesn’t make it any less impressive, especially as its winding alleys offers an interesting departure from the grid system of the rest of the city.

No matter the time of day or night, there are always people about, things to see, and places to stumble upon or into. Must-sees include the cathedral, the Plaça de Sant Felip Neri, and the Plaça Reial, with its Gaudí-designed streetlamps.

Midway along La Rambla as you head toward the sea is Mercat de la Boqueria, Barcelona’s most famous food market. A popular tourist destination, this food market supplies the city’s residents with seasonal produce while functioning as home to several cozy bars and restaurants. If you just want to wander around and snack, you’ll quickly find something to please your taste buds.

It might be a mild faux pas to recommend Italian food while touring Spain, but we may have found an exception. For a quick bite, head to the center of the market behind the fish stalls to enjoy some wood-fired pizza by the slice. We’re told it’s a favorite of El Bulli founder Ferran Adrià. boqueria.barcelona/home

Insider tip: Parts of the market still favor cash over card, so come prepared. It’s open from 8:00 a.m. to 8.30 p.m., but you don’t need to arrive too early. The market typically becomes lively around 10:00 a.m., with the peak of the hustle and bustle occurring around 2:00 p.m.

Insider tip: For specialty Catalonian cheeses like fresh goat’s milk Bauma Carrat and creamy wheels of Nevat, look no further than Cansaladeria-Xarcuteria Can Martí Jordi in the Mercat de Santa Caterina for the city’s best selection. And if their selection has you feeling overwhelmed, they’ll happily let you taste before you buy.