See the capital of Peru through a fresh lens, try new takes on old favorites and discover fascinating places far off the beaten tourist trail.

As South America’s third-largest metropolis, Lima might seem a little daunting at first. However, a bit of local knowledge can unlock authentic experiences that’ll quickly help you slide into rhythm of the city and transport you straight to its vibrant heart.

Lima is a place where pre-Incan pyramids stand alongside contemporary apartments, and where the coast is always close, but the mountains are never far.

From roaming street art rejuvenated suburbs, checking out captivating colonial churches, and discovering ancient archaeological sites to surfing off sandy beaches, and splashing about in mountainside waterfalls, here are some activities that embrace the enormous variety this city of contrasts has to offer. 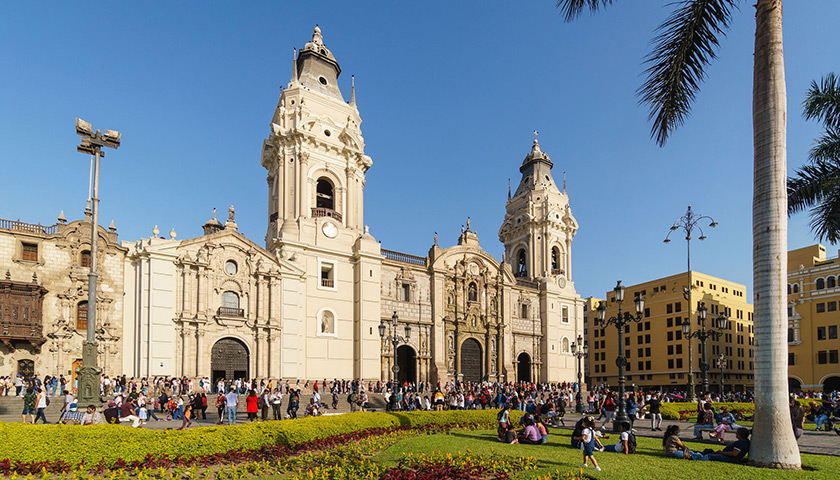 All South American cities have central squares, and this one became the place where modern Lima began in 1535—as well as the nucleus of Spain’s entire South American empire for that matter. Renowned conquistador Francisco Pizarro, who secured Peru for the Spanish crown, chose the site himself. Often described during its history as one of the New World’s finest plazas, it still fails to disappoint.

The ornate Cathedral of Lima and adjoining Palacio Arzobispal, center of the Catholic church in Peru, occupy the southeast side, while the Baroque-style Palacio de Gobierno (constructed in 1937), Peruvian presidential HQ, flanks the northeast edge. Grab a seat overlooking the plaza’s 17th century fountain and drink in the history.

Insider tip: Peru’s central square has free Wi-Fi: a great spot to check emails without eating up your data allowance.

Raised on the site of an Incan shrine and palace, and with Pizarro laying its first stone in 1535, the city’s principal cathedral is a historical layer cake. It was rebuilt numerous times, and in its current guise, in the 17th and 18th centuries.

This white, double-towered building is part of the UNESCO World Heritage Site of the Historic Center of Lima, appropriately housing the tomb of Pizarro and one of the most splendid carved wooden altars in the Americas, an early 17th century Pedro de Noguera masterpiece. The cathedral is free to enter, but there’s a fee to enter its religious museum.

Insider tip: Guides are on hand to give in-depth cathedral tours for a charge. 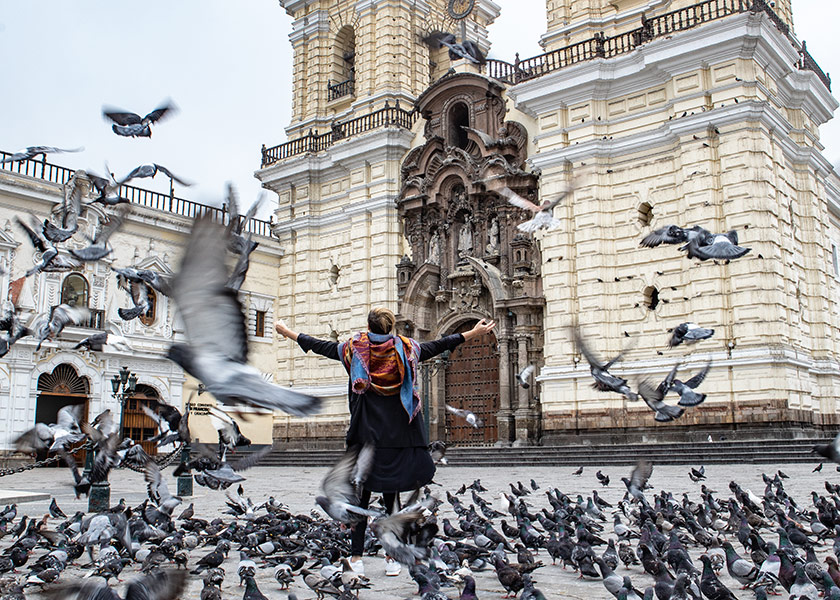 This large, lemon-yellow 17th century Baroque church and convent is among Lima’s best-preserved colonial buildings. You can appreciate the intricate facade free of charge, but to see the best parts, take a tour inside.

A convent refectory houses Spanish master Francisco de Zurbarán’s imposing paintings representing the Twelve Apostles, a grand 25,000-volume library contains internationally important texts such as one of the first Spanish dictionaries and a 16th century Bible, and impressive double-tiered cloisters enfold a tranquil garden. Equally compelling is what lies beneath: labyrinthine catacombs, flanked by the bones of thousands of human remains.

Strolling along the malecón (waterfront walkway), spanning a long, lovely band of almost continual green for several miles in front of flashy Miraflores neighborhood, feels like one of the single most satisfying Lima experiences.

The joke once was that the only reason to visit this port district was for the international airport alongside it. But huge efforts have rejuvenated this part of Lima so that emerging from your long-haul flight and coming straight to the relaxed little peninsula La Punta is infinitely more appealing than spending a traffic-snarled hour reaching your Miraflores or Barranco hotel.

Afterward, check out the bulky defenses of nearby Callao’s Fortaleza del Real Felipe, a vast, well-preserved fort constructed in 1774 to protect Lima from corsairs.

Insider tip: At Monumental Callao behind the port, street artists have brightened up a once-rough neighborhood around Plaza San Martín with murals and made it a hub for creative types.

You don’t need to travel too far south of the city to encounter photogenic sweeps of sand. The nearest popular beach is at Punta Hermosa, 28 miles from central Lima. Like several other stretches of this coastline, big waves make it more popular with surfers than swimmers.

A more relaxed alternative is the quirky fishing village of Pucusana, 45 miles south of the center, which is delightfully free of the fog that often beleaguers Lima and has a more sheltered, sandy coast. Otherwise, travel 90 miles south of the city to Cerro Azul for the most dazzling beach of all, where well-kept sands and Southern Peru’s best surfing await.

THE ANCIENT AND THE ANDEAN

Step into prehistory at Pachacamac

One of Peru’s most unjustly overlooked archaeological complexes is a mere half-hour drive south of central Lima: a vast pre-Columbian citadel, dating back to at least 100 AD. Standing out from the dusty desert in the form of adobe walls, palaces, and temples, it was at different times home to the Lima, Wari, Ichma, and Inca civilizations. There is a good, modern on-site museum, and views from atop the mighty Templo del Sol (Temple of the Sun) are excellent on a clear day.  pachacamac.culutura.pe

Insider tip: Five miles north of the ruins, you can lose civilization within the lush, craggy hiking area of Lomas de Lúcumo.

Adventure into the mountains at Obrajillo

Although the rugged Andes are not generally associated with a Lima day trip, a two-hour drive takes you into the verdant foothills, where you’ll reach the time-trapped mountainside village of Obrajillo.

It’s a fantastic place to relax away from the busy city, with days spent rambling to bucolic viewpoints, archaeological sites, waterfalls, and swimming spots. The green pocket of paradise is south of Canta, 65 miles northeast of Lima.