Time-honored classics from pre-Inca civilizations and celebrity chefs steering gastronomy in bold directions: give your palate a gastronomic masterclass in the Peruvian capital.

Often cited as one of the world’s biggest culinary shake-ups is the birth of modern Peruvian cuisine.

Imagine two unique tidal waves forcefully colliding into each other, and you can begin to understand how history played out when pre-Columbian food collided with that of Spanish conquistadors in the 16th century. Other influences, notably Japanese and Chinese, have since crept in to create what is today considered typical Peruvian food.

And Lima, historically South America’s most important port, is where this continent-spanning gastronomy came together and is now exploding in innumerable directions.

Pre-Columbian Peruvian staples were alpaca, cuy (guinea pig) and seafood, often preserved by curing in chicha (a maize-fermented beverage), or by sun-drying. The most fabled Quechan contribution to the world is still ch’arki, a type of jerky. There were also 300 varieties of chili to play with, plus over 4,000 types of potato, with the planet’s very first cultivated near Peru’s Lake Titicaca 10,000-odd years ago. In the nation’s Andean Inca heartland, singular cooking traditions survive from the civilization’s heyday such as pachamanca—marinated meat cooked on hot stones.

Several Peruvian dishes act as “food museums” and celebrate this fusion of Old World and New World, not least of which is the national favorite, ceviche. Pre-Columbians were already preparing corvina (sea bass) by marinating it in chicha, but Spanish-introduced lime, flavored with chili and red onions, became the post-conquest marinade of choice. Even the Japanese, among Peru’s most influential diaspora, contributed by reducing the marinating time and giving rise to Peru’s now-legendary Nikkei food. The standout ceviche spot is La Mar (Mariscal La Mar 770, Miraflores): they work closely with Lima’s local fishermen to offer an unrivalled bounty of boat-fresh fish.

Insider tip: Eating at a cebichería (ceviche restaurant) is the Lima lunchtime experience: ask for the leche de tigre, the divine, tangy ceviche marinade, to be served to you separately in a glass. 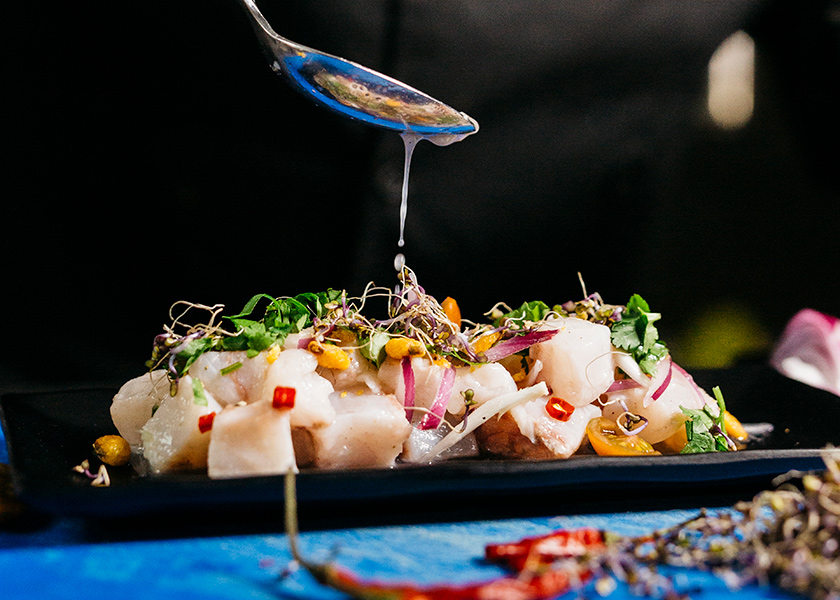 It’s essentially rotisserie chicken, but this is probably Peru’s most widely consumed dish. First created by Swiss national Roger Schuler in Lima province, the chicken is seasoned with salt and spit-cooked over charcoal.

Grilled or boiled plantains get smashed, seasoned, mixed with fat and pork rind, and topped with Peruvian chorizo. The result is textural perfection and it’s a dish traditionally eaten for breakfast.

Michelin does not currently cover Peru but if they did, they would be star-struck. The country has fostered a brigade of chefs in recent decades that have acquired veritable rock star status across South America and are increasingly renowned overseas for their ambitious advancement of Peruvian gastronomy.

You cannot discuss the contemporary food scene without mentioning Gastón Acurio. The chef’s Astrid y Gastón (Av. Paz Soldán 290), now relocated to a palatial former hacienda in San Isidro, originally opened in 1994 and is considered modern Peruvian cuisine’s birthplace. Acurio and his wife Astrid began by offering French fare, then eventually made the switch to lavishing national dishes. The ever-burgeoning Acurio brand, boasting restaurants from Bogotá to Barcelona, is the most recognizable face of Peruvian food worldwide.

Virgilio Martínez is another household name. Landing Peru’s first Michelin star for his London-based Lima restaurant, his flagship is Central (Av. Pedro de Osma301) in Barranco. It’s topped Latin America’s edition of the 50 Best Restaurants list several times and is a regular top-tenner in the worldwide version, but such is Martínez’s creative drive that whatever gets written about Central dates fast. Suffice it to say that courses are themed around specific topographical regions and elevations, and Peru has 84 ecological zones, so there is ample inspiration. Menus are powered by vigorous research into food geography, Andean plankton through Amazonian arapaima, carried out by Martínez and his team at Mater Iniciativa.

Meanwhile Maido (San Martín 399) is where the artistry of Mitsuharu Tsumura, Peru-born but of Japanese descent, has made Nikkei food legendary. It’s the only equal to Central in terms of international accolades in the city.