Sitting atop a long coastline of cliffs battered by Pacific breakers, the cosmopolitan metropolis of Lima beguiles with its pre-Columbian temples, world-class museums, and one of Latin America’s best gastronomic scenes.

But if you’re looking to explore Peru beyond Lima, there are diverse experiences close the capital. From ancient pyramids, traditional villages, and mysterious desert lines left by long-lost civilizations to white-water rafting, wildlife spotting, and adrenaline-packed dune buggy adventures, these are the five experiences we can’t recommend enough. 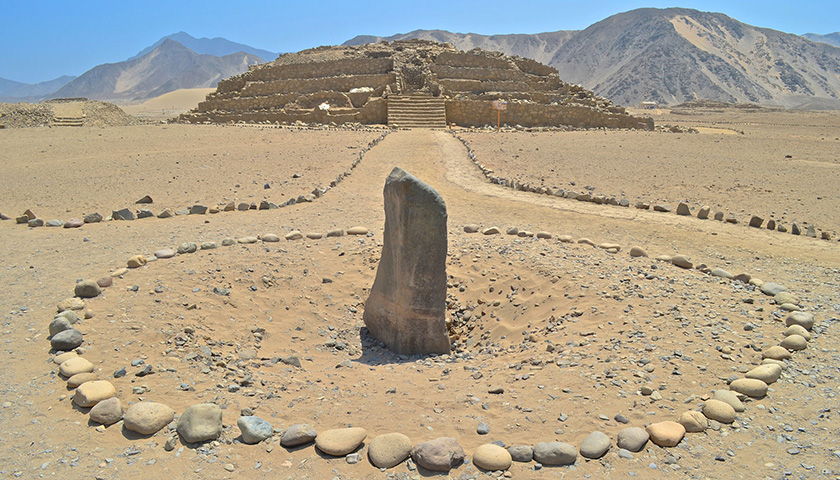 One of the oldest cities in the Americas, the UNESCO-listed Caral (https://www.zonacaral.gob.pe) sits on the sunbaked flatlands of Supe Valley, framed by the bare, dramatic-looking mountain range. In one of only six places on Earth where civilization sprung up independently, Caral’s people thrived some 5,000 years ago, excelling at agriculture and music, conducting elaborate religious ceremonies, and making offerings to the gods on top of the city’s six stone pyramids.

Climb to the top of the stepped Great Pyramid to admire the massive sunken plaza, explore the Amphitheater Temple with its rows of mysterious niches, and view the Chupacigarro geoglyph that attests to the Caral people’s sophisticated knowledge of astronomy. A small interpretation center displays ancient jewelry and musical instruments made from animal bones.

How to get there: Catch a colectivo (shared minibus) from Lima to Supe and then another colectivo to Caral. Alternatively, you can make the 120-mile drive to the village of Caral and cross the footbridge yourself. 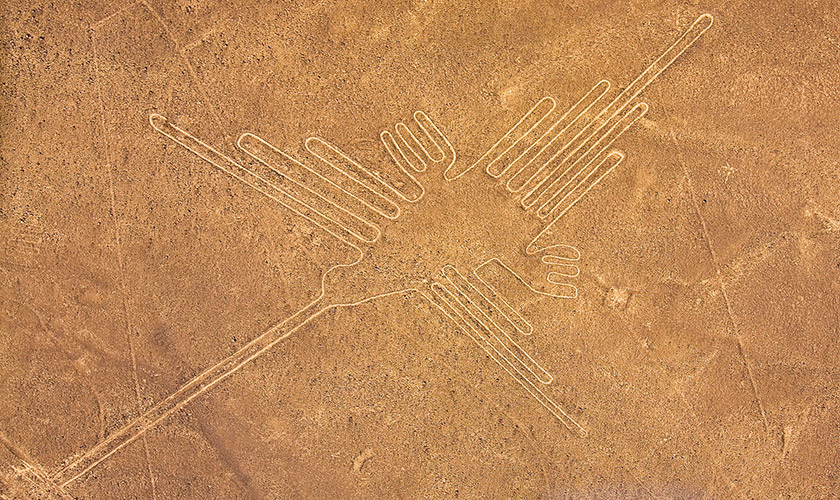 The Nazca Lines are giant animal geoglyphs and ancient geometric lines that crisscross the Nazca desert and one of the world’s most enduring and enigmatic mysteries that’s been baffling archaeologists and scientists for decades. They’re believed to have been made by the Paracas and Nazca cultures between 900 BC and AD 600 for purposes unknown.

As you soar above the Pampa Colorada in a tiny Cessna that dips from side to side and loops around to allow all passengers a glimpse, a giant hummingbird, a monkey, a spider, a condor, and a shaman with a mystical owl’s head sail into view. Then there are the perfect triangles etched into the desert, several miles long. Though we do know that the lines were created by painstakingly removing the darker layer of stones to reveal the lighter colored soil beneath, questions remain. How did the creators get the lines so straight? What purpose did the animal images serve?

How to get there: Lima is connected to the town of Nazca (six hours) by frequent long-distance buses, so it’s either a very long day or an overnighter. It’s possible to do a flight over the Nazca Lines from Pisco airport, closer to Lima, but these are more expensive than flights from Nazca.

Appearing like a mirage, Huacachina is a tiny village lined with retro hotels that sits next to a palm-fringed desert lagoon. Sand is the big attraction here. Visitors rent waxed sandboards in the village, then trudge up the dunes before surfing or belly-sliding their way back down.

Another adrenaline-filled way to experience the dunes is aboard rugged, open-sided areneros (dune buggies) that shimmy up and down the steep sandy slopes during early morning and late afternoon.

How to get here: Numerous long-distance buses run daily from Lima to Ica, 190 miles south (four hours). From Ica, you can catch an inexpensive taxi to Huacachina, a mere two and a half miles away.

Accessed via two-hour boat tours departing from the fishing village of El Chaco, has an unmistakable olfactory presence, and you’ll smell the craggy little islands before you reach them. These small, uncovered boats sail past a peninsula that’s part of the Paracas National Reserve and home to the immense Candelabra geoglyph that’s etched into the sandy hillside, as well as diverse range of wildlife you can observe. There are plenty of opportunities to spot birds and colonies of seals and sea lions as the boats cruise around the islands’ arches and caves.

Two things draw visitors to the small 17th century town of Lunahuaná: river rapids and wine. The Class IV rapids of the rushing Río Cañete are challenging enough even for experienced rafters and its waters simultaneously irrigate local vineyards. The best time of year for rafting is between December and April when the rains in the Andes swell the river banks, but if you’re looking for a gentler float, the rapids are Class III the rest of the year.

The tiny, traditional mountain village of Catapalla lies almost four miles further up the valley. Here you’ll find Bodega Reina de Lunahuaná (https://bodega-reina-de-lunahuana.negocio.site/), one of the oldest artisanal wineries in the area, right on the appealing main plaza. It excels at the production of pisco (Peruvian grape brandy), and its owners are happy to show you around and explain both the process and why Peruvian pisco is superior to Chilean when it comes to mixing a pisco sour, a cocktail that both countries claim as their own.

How to get there: Lunahuaná is 116 miles southeast of Lima. Frequent long-distance buses ply the Panamericana between Lima and Ica, stopping in San Vicente de Cañete. In Cañete, switch to a combi (shared minibus) to Nuevo Imperial (10 minutes) and then to another combi to Lunahuaná (45 minutes). A self-drive from Lima takes around three hours one-way.