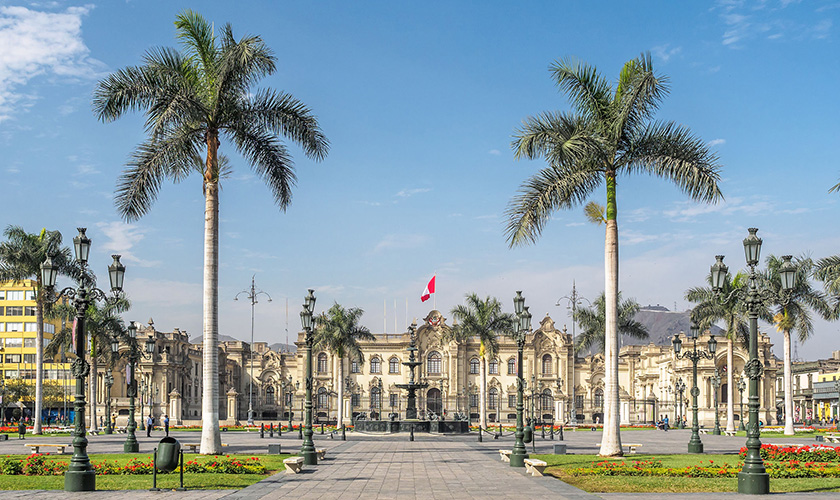 Desert destination, coastal city, and culinary capital, Lima is the modern metropolis with a storied past that has it all.

Above the wave-battered cliffs of Peru’s Pacific coastline, Lima's metropolis rises out of an otherwise barren landscape. The world’s second largest desert-set capital, the city is a blend of high-rise buildings, public parks, and colonial vestiges that spill into the Sechura Desert.

The cosmopolitan outpost was founded by a Spanish conquistador in 1535 and brims with a history dating back a millennium. As such, archaeological sites dot the city with the same frequency as high-rises, while museums of Incan artefacts sit alongside galleries of contemporary art. Not just the capital of Peru, Lima is the culinary capital of South America, and its gastronomy as rich as its history.

We’re taking a closer look at the city’s finest hotels, where you’ll experience Lima’s ancient legacy infused with the vibrance of a multifaceted culture centuries in the making.

Eleven stories of mirror-like glass reflect the adjacent ocean which creates a glittering spectacle for one of the city’s more upscale addresses—especially at sunset. A stay here places you among the city’s shopping hub, and a classic pisco sour at the rooftop The Observatory, or dinner among Tragaluz’ art-adorned walls will have you rubbing shoulders with Lima’s fashionable set.

You’re about as oceanside as you can get in the city and views over the Pacific provide the backdrop to the Presidential Suite’s terrace plunge pool. You’d be forgiven for forgetting your desert surroundings at this verdant locale, where greenery spills from every corner, culminating in a manicured garden complete with its own turtle pond.

Insider tip: While you’re staying in Miraflores, a visit to Larcomar is in order—the city’s iconic cliff-hugging outdoor mall. This popular retail destination is known as much for its upscale shops and eateries as its sweeping views over the Pacific.

Golf and gold-leafed glamour at the Country Club Lima Hotel

Lima’s roots are inextricably tied with Spanish colonialism and it's this history that is the cornerstone of the Country Club Lima Hotel. Here, hand-painted Spanish tiles and 16th century artworks (on loan from the Museo Pedro de Osma) set a viceregal scene best enjoyed beneath the iconic stained-glass atrium of Los Vitrales with pisco sours in hand.

The preservation of the hotel's Hispanic colonial architecture has made the property a national cultural monument, but it’s the no-holds-barred approach to luxury which culminates in the larger-than-life Dom Perignon suite and posh San Isidro address that has cemented its status as the city's most coveted locale. It has been the retreat of choice for celebrities and dignitaries since its opening in 1927, with John Wayne and Ernest Hemingway among those who have wandered its marble-clad hallways.

Insider tip: The hotel sits adjacent to one of the desert city's largest swathes of green—the Lima Golf Club. A long-standing arrangement between club and course enables guests to enjoy a round or two on the members-only fairway.

The white facade of this adobe mansion helps it stand out amid the tree-lined boulevards of Lima's lively bohemian district, Barranco. The home-turned-boutique-hotel was once a wealthy family's beach hideout, and a visit to the rooftop lounge serves to remind you just how close you are to the Pacific with dazzling ocean views.

The Prix Versailles Award-winning interior transports you to Lima's prosperous post-colonial Republican era, where columns, stained-glass windows and lofty ceilings were the height of luxury. In a neighborhood dotted with the capital’s finest galleries, you don't have to go far to soak up its rich art scene (MAC Lima is only a short walk away) and even the contemporary pieces that color the hotel's walls are worth a second look.

Insider tip: Barranco is regarded as Lima's top food district, and you’ll want to stop off at nearby Peruvian dining hotspots Chala and Cala for some of the city’s finest traditional ceviche.

Your home away from home at Villa Barranco by Ananay Hotels

Amid the eight spacious bedrooms that comprise this boutique address, you'll find an abundance of that home-away-from-home intimacy so coveted by hotel-wearied travelers. Vintage furnishings and trinkets abound in this Republican-era two-story manor, lending it character and a quirky disposition that make it perfectly at home among the vibrant cafe, museum, and gallery-filled streets of Barranco.

Don’t let its size and eccentric decor fool you, though—Villa Barranco's bougainvillea-framed hospitality is first rate and its crown jewel, the spacious Master Suite is fit for the Spanish conquistadors that once called the city home.

Insider tip: It's no secret that Barranco comes alive at night and, if braving the crowds at a nearby nightclub or bar hasn’t made it onto your itinerary, you can soak up the neighborhood’s buzzy atmosphere from Villa Barranco's rooftop terrace.

Escape amid the flowers at the Hotel Antigua Miraflores

Along a path well-trodden, today by tourists and, a millennia ago, by pre-Incan civilizations traveling to the Huaca Pucllana temple, you’ll find yourself at the gate of the Antigua Miraflores Hotel. Miraflores means “behold the flowers,”and if you steal a glance out a window or step onto the hotel’s patio, that’s just what you’ll do, as the property is fringed with tropical bloom-filled bushes.

This charming 100-year-old Spanish-colonial casona (mansion) feels trapped in time, with traditional tiled floors and an eclectic array of antique and handcrafted furniture greeting you as you step inside. This doesn’t mean your amenities are dated though, as there are air conditioners and Jacuzzi tubs in each room. As you lie in bed listening to the center courtyard fountain, you’ll feel removed from the glitzy boardwalk developments like Larcomar which lie within walking distance.

Insider tip: Visit Huaca Pucllana, the stepped pyramid-like temple built by the Pre-Incan indigenous Lima civilization, for a glimpse into the city’s ancient past.