Dubai’s food scene is as global as its largely expat population and as ambitious as the record-breaking skyscrapers overlooking the Persian Gulf.  Michelin-starred chefs and humble immigrants alike serve recipes from far and wide, reinterpreting their national dishes and evolving Arabic cuisine, which can still be tasted in traditional form in the older districts bordering Dubai Creek. When you’re drawing up your bucket list of restaurants to book and dishes to try, don’t miss these renowned dining destinations and local haunts to experience the classic tastes of Dubai. 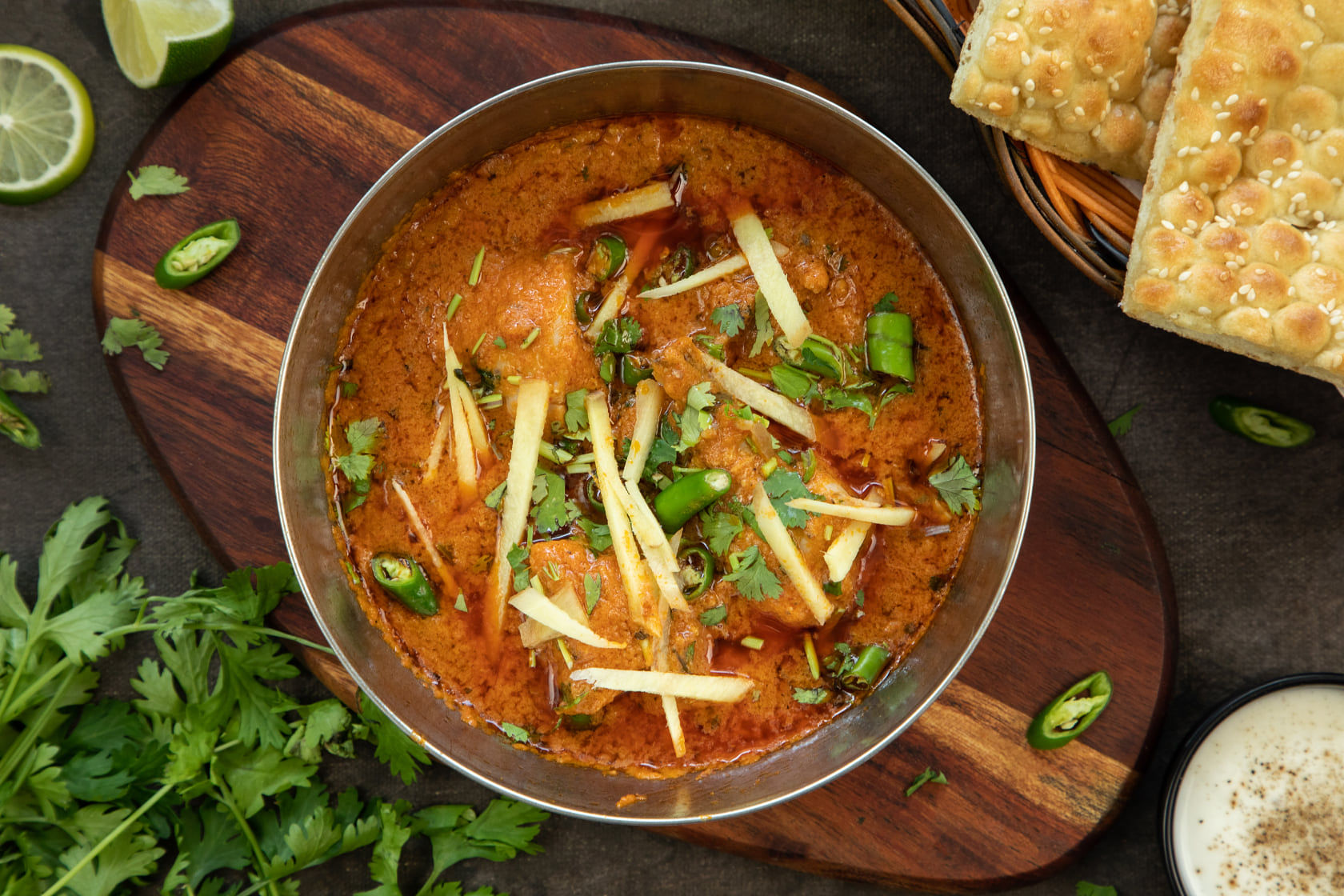 A TASTE OF TRADITION

Fifty years ago, Dubai was a dusty outpost with camels roaming freely and dhows drifting along the creek. Today you can still taste this desert heritage at a number of places. A great place to start is the famous Arabian Tea House (Al Fahidi Street), located amid the shady lanes and sand-colored wind towers of the Al Fahidi Historical District, a heritage neighborhood built by Persian settlers in the early 1900s. Revive yourself from the languid heat with a cup of gahwa (traditional Arabic coffee) in a classic setting of turquoise benches, white rattan chairs, lace curtains and gazebos in this former pearl merchant’s house. Try traditional Emirati dishes, including a breakfast tray of balaleet (an omelet and vermicelli), date syrup, khameer bread, lamb tikka, salona deyay (chicken stew) and cheese-stuffed sambosa pastries, washed down with karak cardamom, cinnamon and saffron tea or a date milkshake.

Cuisine from other parts of the Middle East and across the Gulf of Oman has been popular for as long as workers have arrived from the Indian subcontinent and beyond to build Dubai. This has brought an unbeatably global diversity to the city’s restaurants and markets. You can experience the decades-old expat food scene at the Pakistani Ravi Restaurant (off Al Dhiyafa Road). Dishes include a classic Punjabi mutton, chicken or vegetarian achari curry, made with pickling spices and served with naan bread against the atmospheric backdrop of the Al Satwa neighborhood’s casual eateries and street life.

Khubz, typically pita-like tandoor-cooked flatbreads, have long been central to Arabic cuisine, and Dubai’s Home Bakery continues this tradition. Established in 2011 by baking businesswoman Hind Habib Al Mulla, the chain’s branches at The Dubai and Galleria malls are essential stops for sweet treats from cheesecake to pistachio kunafa, a Middle Eastern dessert. 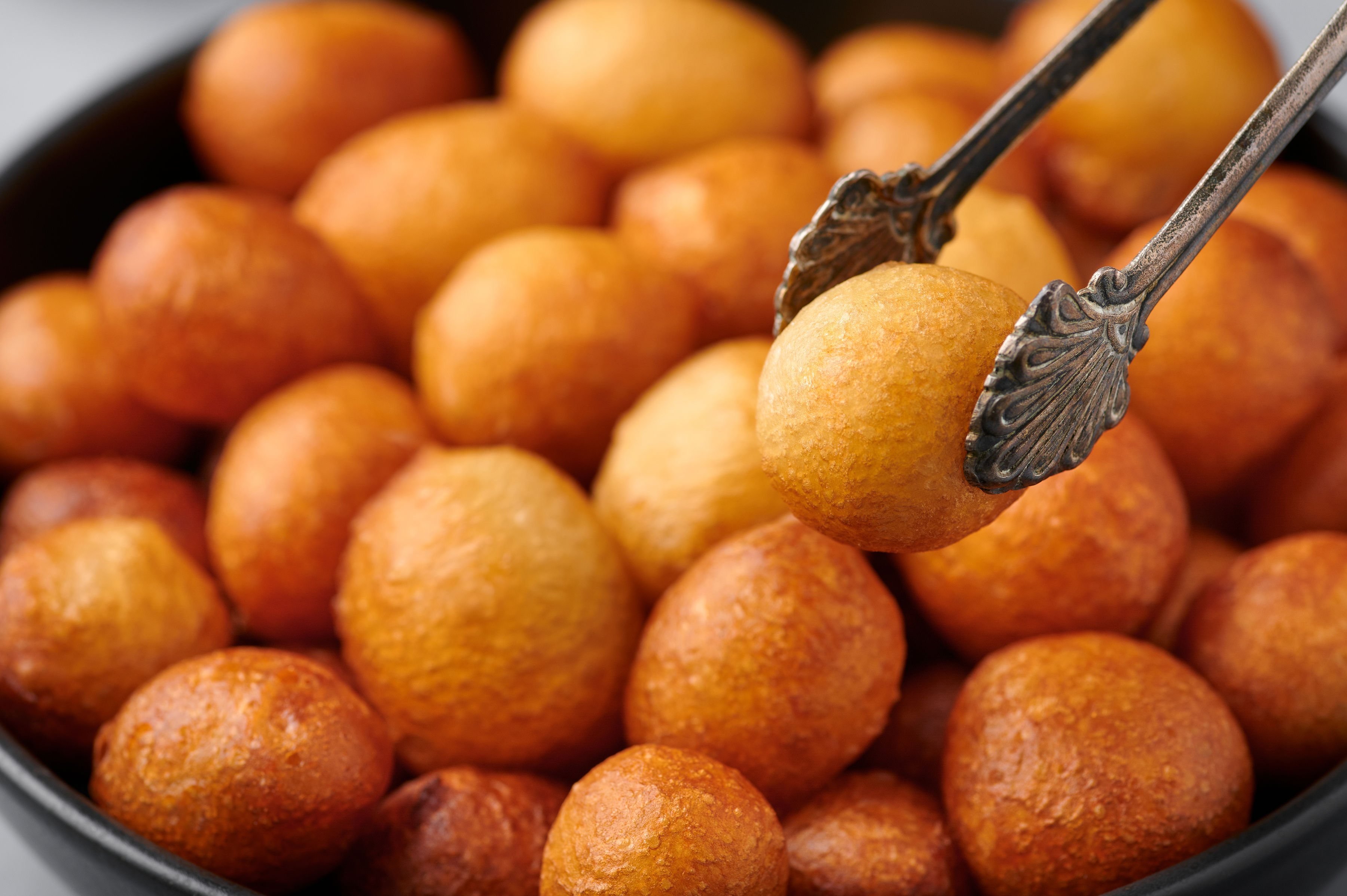 Try these traditional Emirati favorites at the Arabian Tea House and other spots in Bur Dubai, the old town on the western side of Dubai Creek.

Margoogat – a satisfying chicken or lamb stew that mixes chunky vegetables with turmeric, cumin and other spices in a tomato-based sauce.

Manousheh – a Lebanese import that looks like a pizza, Emiratis love this spicy, white flatbread for breakfast, topped with herbs, cheese, meat or sweet ingredients.

Luqaimat – the Middle East’s hot, crunchy answer to the doughnut. Try a fresh plate of the bite-sized dumplings, sprinkled with sesame seeds and drizzled with sticky date sauce, alongside your coffee.

Chebab – another sweet treat, these spiced pancakes are filled with sour cheese and honey or sweet date syrup and heated for an oozy breakfast. 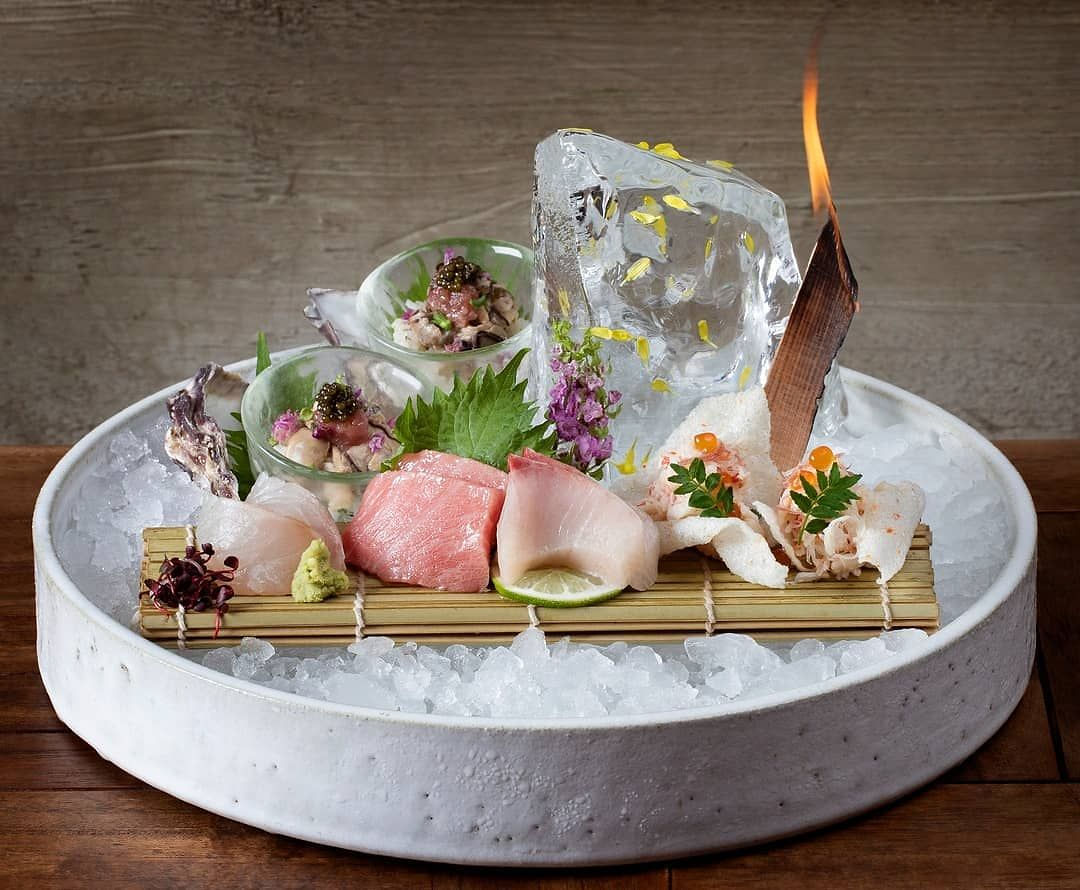 A TASTE OF THE FUTURE

Dubai is a truly global city, attracting millions of expats to its building sites and corporate offices alike, and this cosmopolitan spirit infuses the cuisine on offer. Workers from the Philippines, Pakistan and everywhere in between flock to markets and neighborhood restaurants for local interpretations of their national dishes, while branches of Michelin-starred empires offer menus that are every bit as ambitious as the landmark hotels they occupy.

In this desert-warmed melting pot, anything is possible, not just in terms of the global choice but in the fusions produced by the enthusiastically experimental dining scene – such as Akiba Dori’s (off Ras Al Khor Road) mix of Japanese street food and ‘Tokyopolitan’ pizza. Inspired by Tokyo’s anime-plastered Akihabara neighborhood, the neon-lit restaurant in the Dubai Design District serves dishes from Wagyu tacos to cinque formaggi pizzas in a setting designed to resemble a Japanese backstreet.

The humid Amazon may seem a world away from the Persian Gulf, but Latin cuisine is hugely popular, with outposts of renowned South American-inspired chains and Rumba Dubai’s (Club Vista Mare, The Palm Jumeirah) Cuban experience on offer. Its vintage furniture and pastel palette transports diners from an artificial island to 1950s Havana, with ceviche and tacos served alongside mojitos and Montecristo cigars.

Contemporary Asian food is another trend to look out for, like at 3Fils (1 Al Urouba Street) in Jumeirah Fishing Harbour, featured on The World’s 50 Best Restaurant’s Discovery list for dishes such as seaweed salad and crispy eel, and the Japanese robatayaki restaurant chain ROKA’s Dubai branch (The Opus by Omniyat, Al A’amal Street, Business Bay). 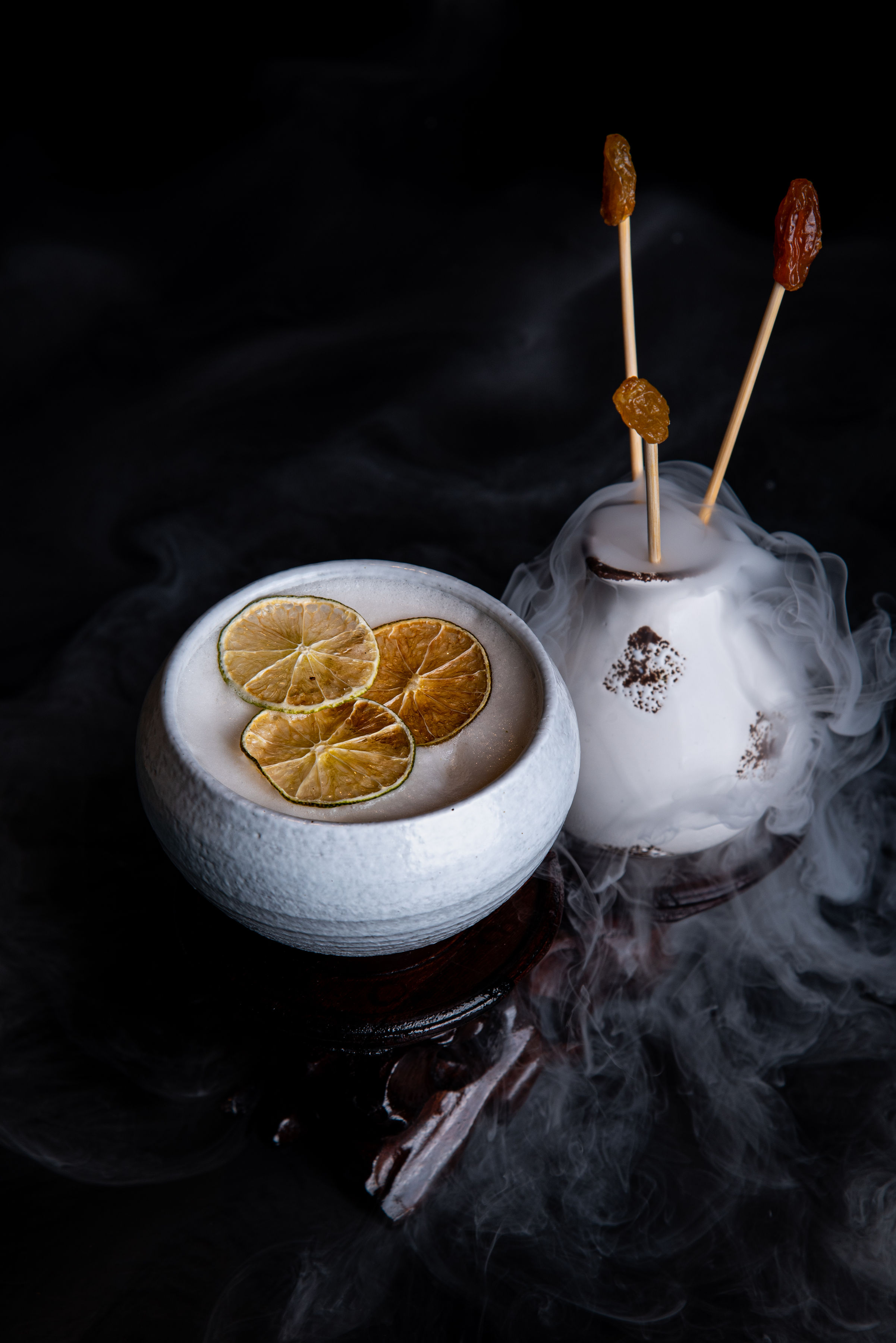 Add this trio of in-demand restaurants to your dining itinerary for a mouth-watering overview of the key strands in Dubai’s multifaceted dining scene.

Brunch is a popular way to ease into hot Dubai days, and the city’s branch of the global Peruvian franchise draws the biggest crowds with its cocktails, exuberant live music and platters of ceviche and croquettes. The vibrant Latin restaurant serves classic dishes from tacos to tiradito.

Indians have been bringing recipes to Dubai for more than half a century, and Trèsind’s flagship puts a self-described ‘modernist’ spin on this rich strand of the city’s culinary scene. Featured on The World’s 50 Best Restaurants’ Discovery list, its blue dining room is an elegant backdrop for chef Himanshu Saini’s molecular interpretations of Indian cuisine. Trèsind Studio also offers an intimate chef’s table experience for up to 20 diners.

Steak with a difference at Doors Freestyle Grill

The ‘freestyle grill’ concept at this steakhouse on Dubai Creek includes carnivorous riffs such as beef sushi, beef steak burgers and beef asado. The menu of melt-in-your-mouth favorites features lamb rack and the only-in-Dubai striploin steak embellished with a delicate layer of gold, while shisha and whimsical mocktails add to this contemporary experience of Arabian dining.