Forget waking up in a generic room. Book your stay at one of Dubai’s ultramodern hotels and experience the beauty of this city on the Persian Gulf coast. 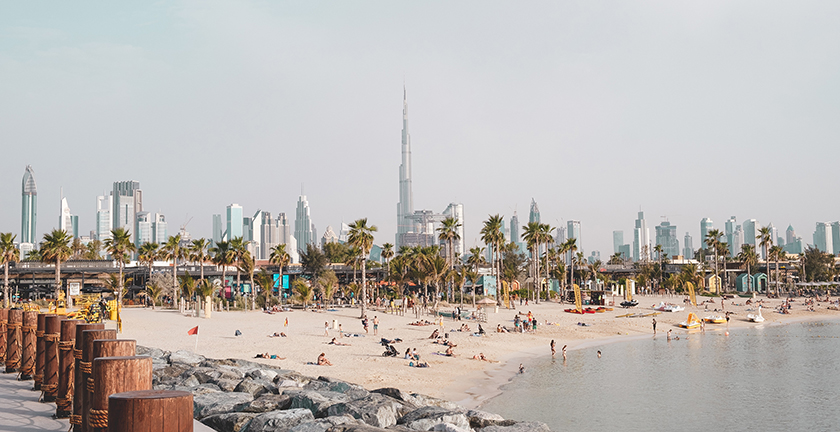 With record-breaking skyscrapers, clusters of man-made islands and some of the world’s largest shopping malls, Dubai is a city defined by luxury. Its hotels and resorts are no exception, and we’ve selected a landmark property that reflects Dubai’s unique personality.

The sail-shaped skyscraper of Burj Al Arab Jumeirah, located on the man-made islands in the Persian Gulf, is an icon of a coastline that’s made big changes in recent decades. This property has a distinct sense of place that reflects Dubai’s rise from desert outpost to futuristic metropolis.

Sail into the future at the Burj Al Arab Jumeirah 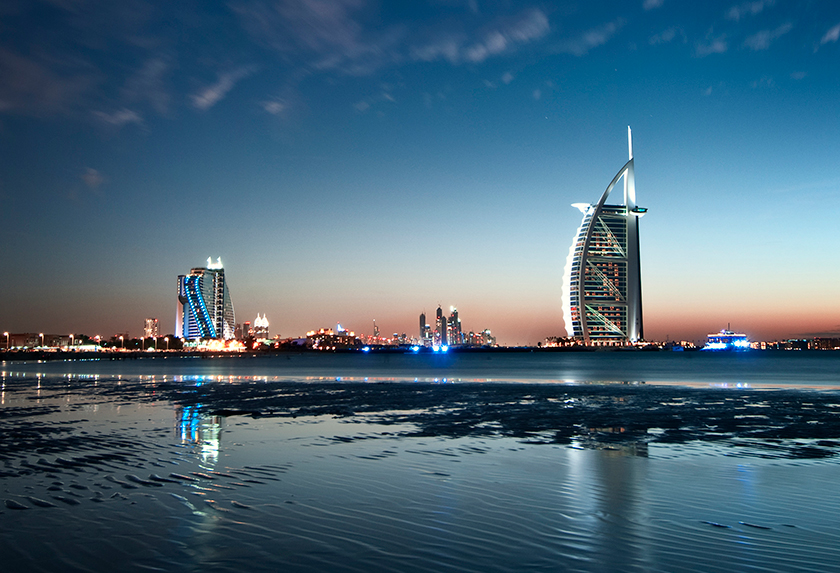 While the Burj Khalifa stands as the world’s tallest building, it’s the Burj Al Arab Jumeirah that symbolizes the city’s soul. One of the world’s tallest hotels, its 1,053 ft-high outline resembles a dhow sail—an homage to traditional Bedouin vessels. The glass-and-steel shell provides a link to the past, while its man-made island location and 56-story structure illustrate the ambition that continues to transform Dubai.

Opened in 1999, it’s the original ‘seven-star’ hotel, with more than 200 suites, a spa with serene views across the Persian Gulf, and unique dining experiences, like Al Muntaha, the acclaimed French and Italian restaurant. Visit the 10,8000 sq ft terrace, with its saltwater infinity pool, gold-tiled freshwater pool, and spacious cabanas to appreciate this historic hotel in all its glory.

Insider tip: The Burj Al Arab took five years to build, and every detail has been considered—you can choose between 17 types of pillows and enjoy the world’s most exclusive eiderdown duvets, featuring down harvested in Iceland.

The underwater-themed resort of Atlantis, The Palm 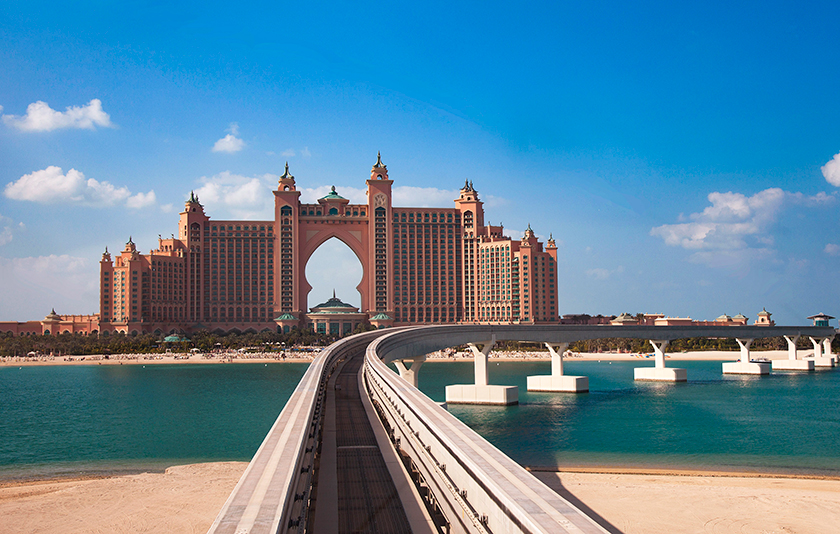 This colossal resort was the first built on The Palm Jumeirah, a palm-shaped island with a monorail and beach-lined foliage. Built by Sol Kerzner, the South African hotel magnate, this resort takes its aquatic theme seriously. Among the 1,500-plus rooms is the Underwater Suite, with views of sharks and stingrays gliding past floor-to-ceiling windows—a backdrop that can also be experienced while dining at the Mediterranean-inspired Ossiano Restaurant.

Continuing the ocean theme, enjoy free entrance to The Lost Chambers Aquarium, where you can snorkel, dive, or view the 65,000 marine animals in the Ambassador Lagoon. The family fun also includes encounters with dolphins and sea lions, while the ShuiQi Spa and restaurants by Nobu Matsuhisa and Gordon Ramsay confirm the resort’s status as a Dubai classic.

Insider tip: For sundowners with a sweeping view of Dubai’s impressive skyline, head to the resort’s WHITE Beach, one of the newest and hottest beach clubs in town.

Step into the Arabian past at Madinat Jumeirah 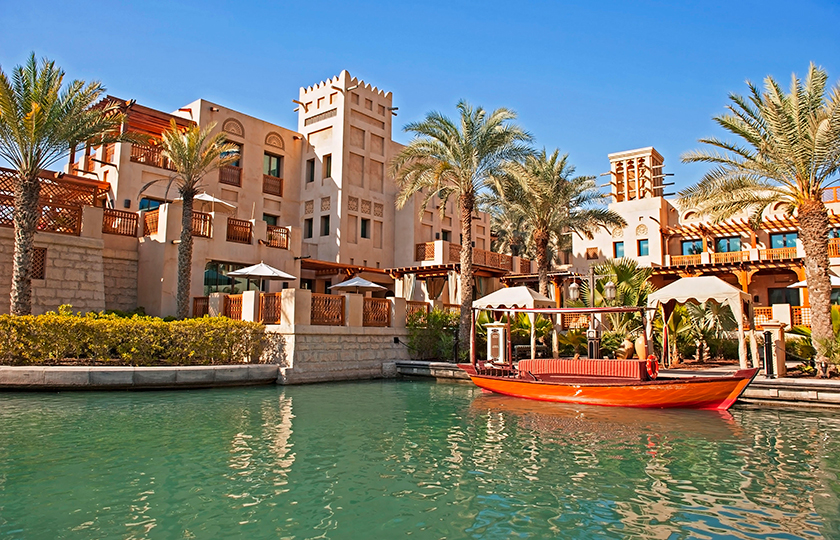 This resort is a coastal garden of palm trees and desert-brown towers, with a network of canals straight out of Venice. Beyond the towers, you can always enjoy a stunning view of the Burj Al Arab.

Designed to resemble the historic district of Bur Dubai and traditional Emirati villages, the complex includes the Jumeirah Al Qasr, Jumeirah Mina A'Salam, and Jumeirah Al Naseem luxury hotels, along with the Jumeirah Dar Al Masyaf summerhouses. It’s truly a self-contained world, which includes a treasure-filled souk, a 10,000 sq ft kids’ club, and about 50 restaurants. Start your morning with hatha yoga at Talise Spa, before exploring the private beach or floating down the waterways on a traditional wooden abra.

Insider tip: At the Dubai Turtle Rehabilitation Sanctuary, you can see and feed marine turtles—including the critically endangered hawksbill turtle—before they’re returned to their natural habitat.

Located more than 30 miles inland from the coast, the Bab Al Shams Desert Resort & Spa celebrates Dubai’s desert roots in its ochre-walled oasis of greenery. In this setting of archways, courtyards, and palm trees, the Middle Eastern romance of Aladdin’s lamp comes to mind, and you almost expect a traditional Arabian falconer to appear. Indeed, falconry displays are on the list of activities, along with horse and camel rides, nature walks, and 4x4 drives through the Arabian Desert.

The resort is especially atmospheric at night, when lamps are lit, shisha aromas fill the rooftop lounge, and diners are treated to belly-dancing performances. After that, you can relax in your suite filled with handcrafted furniture, four-poster beds, artfully stenciled walls, and majlis-style sofas.