Croatia’s islands are the core of the country’s tradition, cuisine, and spectacular scenery.

Croatia has a staggering 1,244 islands, ranging from large islands that house historic towns and charming villages rich in local culture and traditional music, to lush natural havens, and magical archipelagos where you can seek out peace and quiet. Island-hopping in Croatia is essential for those who want to immerse themselves in local traditions. You’ll eat fresh fish and taste the excellent local wine, and lounge on sandy beaches and stunning pebbly coves. If that sounds enticing, then these are the five islands that should be on every visitor’s itinerary.

Possibly the most glamorous of Croatia’s islands, Hvar is an hour ferry ride from Split, and boasts an average of 2,724 hours of sunshine a year, earning itself the reputation as the sunniest spot in the country. Hvar town is beautiful and small with ornamental Gothic palaces that are surrounded by 13th century walls. As a bonus, there’s no traffic inside the narrow stone streets.

The town draws thousands of visitors every summer and is a magnet for yachts with its range of upscale hotels and fine dining restaurants. Expect to find Croatian fish and seafood as well as Italian cuisine on the menus. Meanwhile, Hvar’s many beach bars draw ample party lovers, who will often dance until sunrise and sleep off their hangovers at the nearby Pakleni (Paklinski) Islands or the many town beaches. The island’s interior is a quieter affair, where you’ll find charming stone villages, lavender fields, and hidden coves.

The farthest from the mainland, Vis is also Croatia’s most enchanting island. It was an isolated Yugoslav military base for around 50 years, but these days international and local travelers come here in search of unspoiled local culture, good food, spectacular nature, and excellent swimming. Vis town is set in a wide, U-shaped bay, with a quiet promenade, 17th century stone houses, and narrow streets.

The town of Komiža sits at the foot of Mount Hum, and its narrow streets winding up from the fishing port are lined with 17th and 18th century town houses. There’s an arty feel to the town, and visitors come to see its famous Blue Cave, a spectacular turquoise pool of water on the nearby Biševo island. Vis has some of the best gastronomy in Croatia, so be sure not to miss the traditional peka, a dish of meat and octopus baked under a metal dome covered with hot coals. 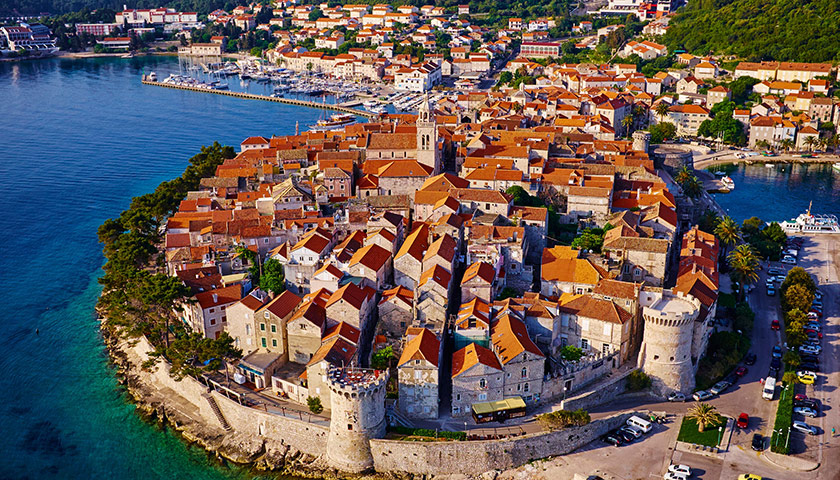 Covered in pine forests, vineyards, olive groves, and charming villages, the island was named Korkyra Melaina (Black Corfu) by the ancient Greeks after its black pine trees. Korčula is the best place to witness local culture. In fact, folk music, particularly the poly-vocal a cappella singing known as klapa, stems from here, and can often be heard in Korčula’s streets.

Visitors can also witness folk dances and festivals, and Moreška Cultural Club is the best place to start. Korčula’s architecture is fascinating, with a fish-bone structure that shelters its inhabitants from rough northern winds while letting in the cool western breeze. Wine drinkers will love touring the vineyards and sampling the unique grapes, particularly pošip, which produces one of the country’s best white wines and grows around Čara and Smokvica villages—the perfect accompaniment to the fresh seafood landed around the island.

If there is one island paradise that is within a visitor’s easy reach, it has to be Mljet. A large part of the western side of the island was designated as a national park in 1960, and this is where most visitors flock. Mljet National Park has two small salt-water lakes: Malo Jezero (Small Lake) and Veliko Jezero (Big Lake), and there's a tiny island called Sveta Marija (St Mary) in the middle of Veliko Jezero that houses a 12th century Benedictine monastery.

The whole area is magical, if a little crowded in summer. To get away from the hordes of people, it’s easy to find quiet swathes of forest, secluded sandy beaches, and dramatic rocky swimming spots. The small village of Saplunara is a popular base for exploring the island.

The Elafiti archipelago northwest of Dubrovnik is one of the Croatia's lesser-known regions, which means it has stayed under the radar of tourists despite its proximity to the mainland. There are 14 islands in total, although only three are permanently inhabited: Koločep, Lopud, and Šipan. Šipan is the largest, although by no means large (it's only six square miles in size), and the best place to base yourself. Must-see attractions include 15th and 16th century villas, Gothic palaces, and the remains of a Roman villa.

Lopud is entirely car-free and has lush gardens, beautiful stone houses, and an excellent sandy beach called Šunj where you can eat grilled fish caught that day. The tiny island of Koločep is covered with pine forests and scattered with olive, lemon, and orange groves. Daily ferries operate from Dubrovnik to each of the three islands during the spring and summer months.