Seoul’s diverse neighborhoods offer a range of experiences to suit every travel taste. 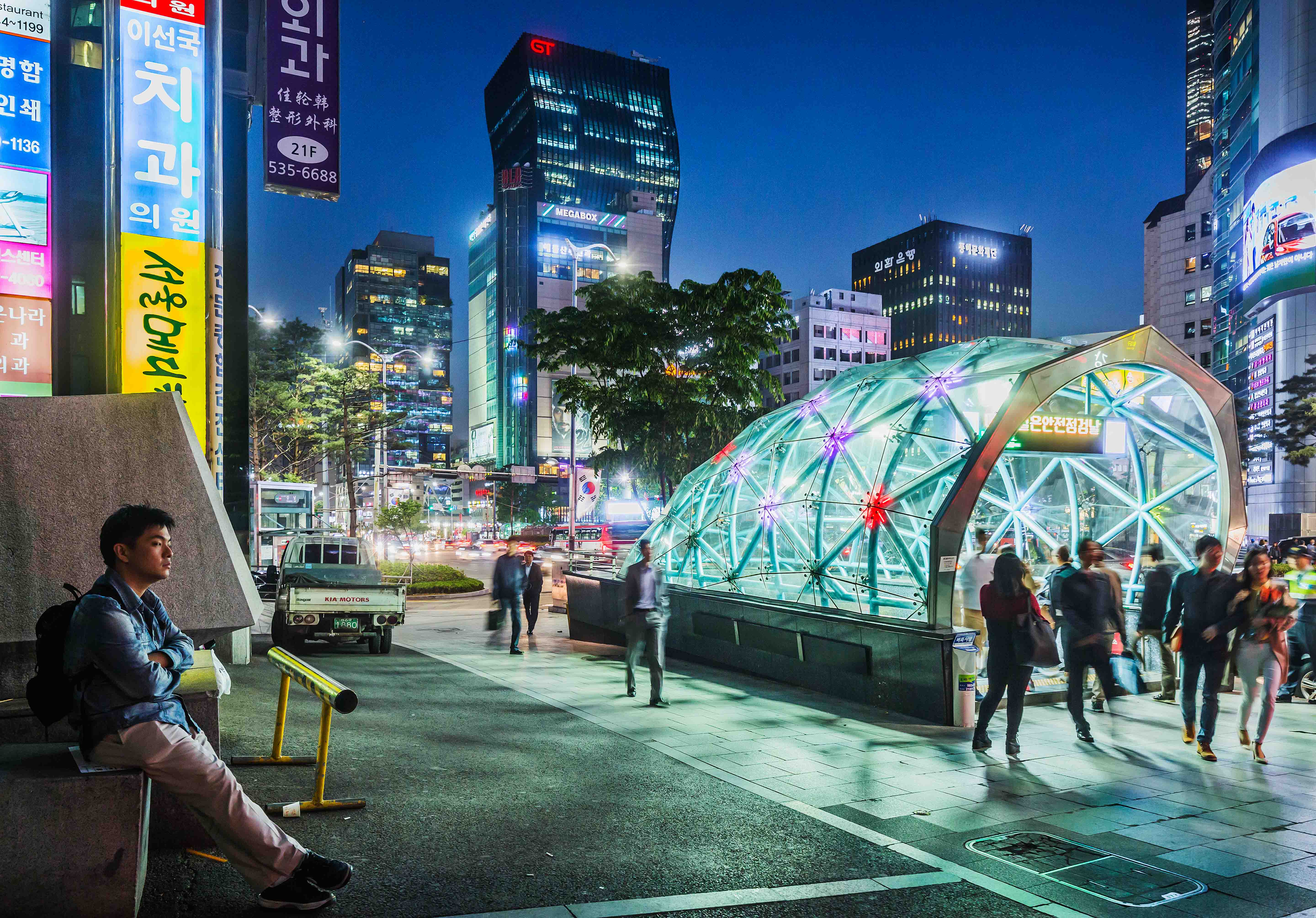 A bustling city of soaring skyscrapers, ancient temples, and more than nine million people, Seoul’s diverse neighborhoods offer unique travel experiences. Jump on the well-oiled subway system to bohemian Hongdae, where artists and students fill the cafés and bars, or take in the cosmopolitan dining and nightlife district of Itaewon. Central Myeong-dong and Insa-dong show a more traditional side of the city, with their pojangmacha tent bars and craft shops, while Gangnam needs no introduction for its world-famous malls and department stores south of the Han River. 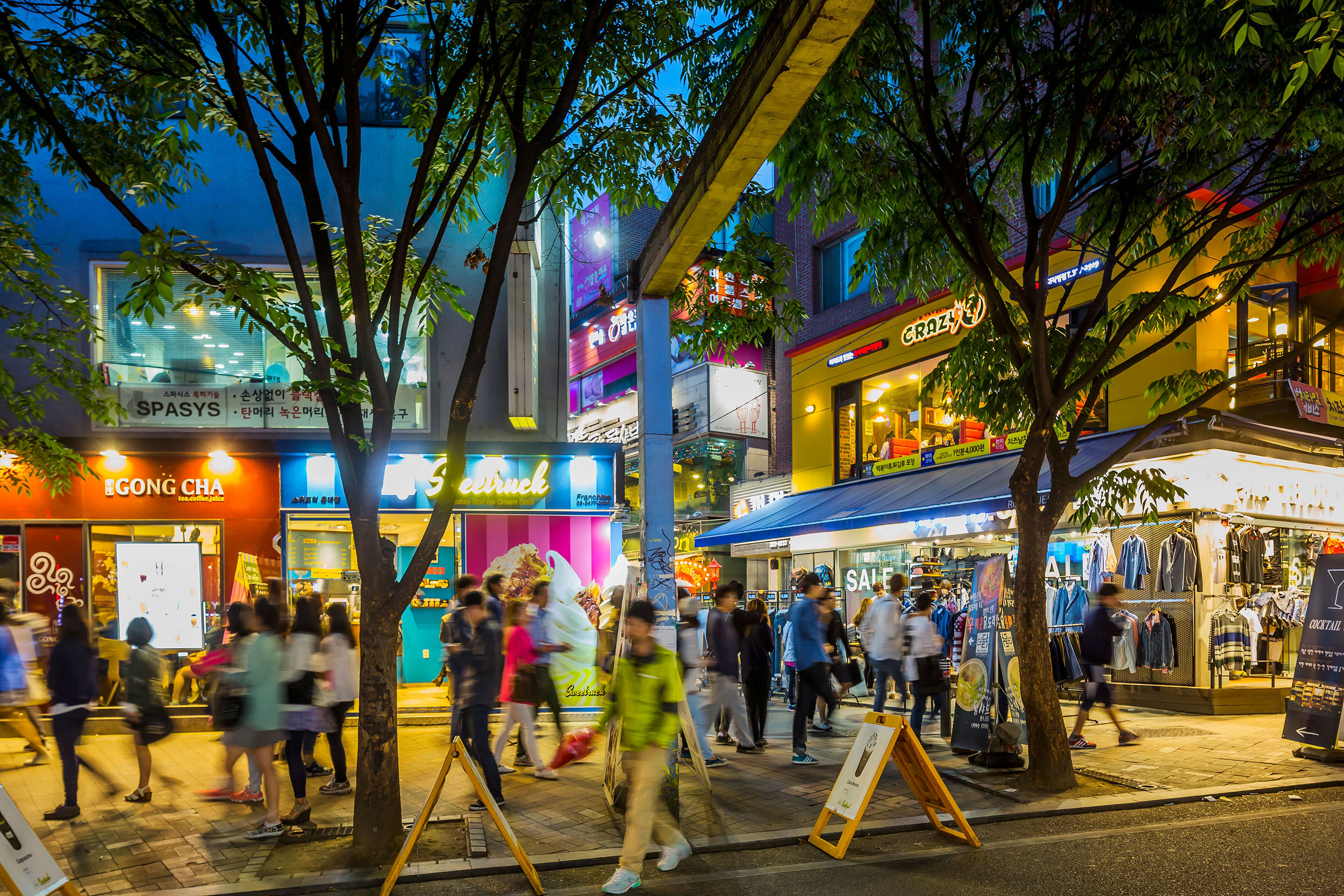 Whether it reminds you of London’s Shoreditch, Brooklyn’s Williamsburg, or Tokyo’s Harajuku, the creative neighborhood around Hongik University is South Korea’s capital of youth culture, cutting-edge art, and underground music. The students and artists renting studios in this area push the creative envelope as readily as they stroll down Yanghwa-ro for a coffee. Whether you shop for cultural inspiration and K-fashion in the boutiques along Eoulmadang-ro and Hongik-ro, or seek out galleries and gigs, this is the place to feel Seoul’s creative pulse.

Where to go: Hit the shopping district of Eoulmadang-ro, also known as Hongik University Street or Hongdae Walking Street, to wander among buskers and bargain-hunting crowds. The bars and shops buzz on Friday evenings, and indie bands entertain locals on an outdoor stage. Despite Hongdae’s bohemian energy, its streets offer dedicated themes, including the nightclub-focused Club Street, and Hongdae Mural Street (Wausan-ro 22-gil). The latter is also known as Picasso’s Street for the graffiti murals decorating this alley alongside the university, and there’s even more creativity on display at the lively Hongdae Free Market (19-3 Wausan-ro 21-gil) held on Saturday afternoons between March and November.

Where to eat: Chef Shin Dong-woo wisely chose this area near the southern end of Eoulmadang-ro to offer a hearty experience of Japanese ramen at Oreno Ramen (14 Dongmak-ro 6-gil, Mapo-gu), which earned the restaurant a Michelin Bib Gourmand recommendation for its noodle broths.

The opening of the Yongsan-Casey US Army base in 2006 turned the area around Namsan Hill into an international zone to rival Bangkok’s Khao San Road. Even though the base is closing, the cosmopolitan spirit remains, and hungry crowds enjoy world cuisine in the restaurants lining main thoroughfare Itaewon-ro. The party scene is also a staple of Seoul’s nightlife circuit, with glowing signs announcing bars, clubs, K-pop-blaring hangouts, and more.

Where to eat: Venture off Itaewon-ro to the side streets in search of fresh discoveries. On Itaewon-ro 27ga-gil, at the rear of the Hamilton Hotel, open-fronted Korean barbecue restaurant Maple Tree House has grown into a small Asian chain for its prime cuts of beef and pork. Grill them at your table in galbi-style and wash down your meal with a Jeju, ARK craft beer, or some soju rice liquor.

Where to drink: For a relaxing start to an evening on the Itaewon strip, head to the rooftop at Blacklist, featuring a cocktail bar and restaurant that offers beef jerky, burgers, steaks, and more.

Psy’s global hit, Gangnam Style, turned this fashionable area of shopping streets and department stores into worldwide shorthand for Asian affluence. Wandering through Seoul’s answer to Beverly Hills is an essential experience, whether to people-watch the brash characters Psy satirizes in his K-pop anthem, or to fill a bag with South Korean fashion. Start an exploration of this area south of the Han River with a walk along Dosan-daero, right next to the river and Gangnam-daero.

Where to eat: Located near the intersection of Dosan-daero and Gangnam-daero, Pro Soy Crab (27-1 Jamwon-dong, Seocho-gu) serves top-quality female blue crabs, caught in Korea’s West Sea during spring and marinated for three days in the house soy sauce. If this crab delicacy, known as ganjang gejang, doesn’t appeal to you, the restaurant serves other seafood dishes, from octopus soup to braised cutlassfish. On the northeastern side of the intersection, cook it galbi-style at Korean barbecue restaurant Sinsa Sogopchang (62 Apgujeong-ro 2-gil, Sinsa-dong), where the grill-your-own meat and seafood platters are perfect for an on-the-go shopper’s lunch.

Where to shop: Galleria (343 Apgujeong-ro, Apgujeong-dong) is a major player in South Korea’s luxury department store market, featuring world-famous designers like Gucci, Louis Vuitton, Prada, Tom Ford Beauty, and more. You can’t miss the armadillo-like building, designed by Ben van Berkel, the Dutch architect behind Stuttgart’s equally impressive Mercedes-Benz Museum. There’s a gourmet food hall to refuel at before continuing to the white orchid-like House of Dior (464 Apgujeong-ro, Cheongdam-dong) for the brand’s fashion and fragrances, and the Hyundai Department Store (165 Apgujeong-ro, Apgujeong-dong)—another Gangnam glamour spot to see and be seen at. 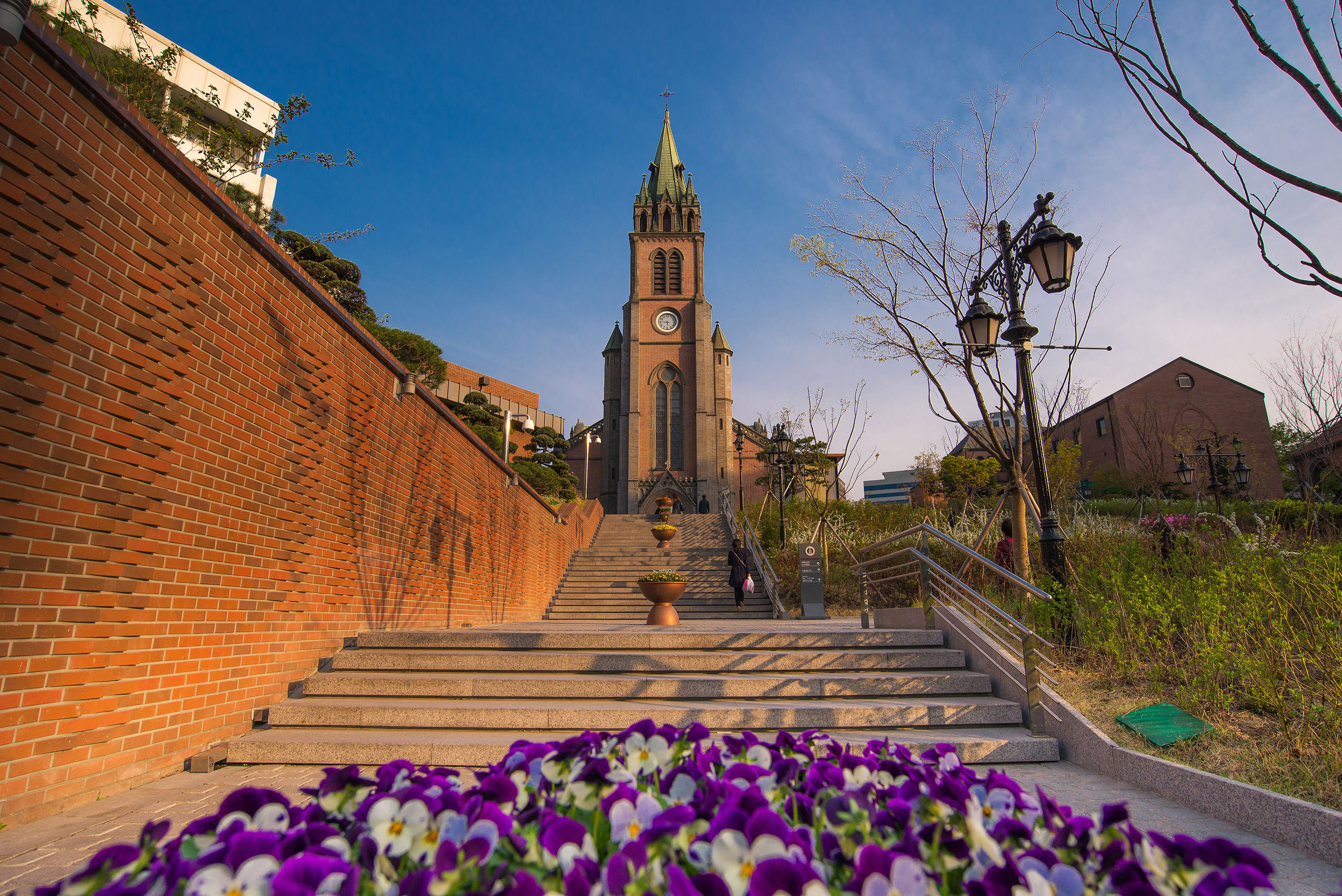 This sprawling inner-city neighborhood is well known for its pojangmacha tent bars, as is the smaller Insa-dong district on the other side of the riverside park of Cheonggyecheon. These local spots are ideal places to try soju, the vodka-like distilled rice liquor, and street foods like tteokbokki stir-fried rice cakes, crispy hotteok pancakes, and sushi-like kimbap rice-and-seaweed rolls. The Myeondong Cathedral (74 Myeongdong-gil, Jung-gu), Korea’s first Gothic building and Roman Catholic parish church, is a local landmark.

What to see: Dedicated to St. Mary, the Seongmo Dongsan garden behind the cathedral is a peaceful oasis in this busy area. In a 1920s courthouse near Seoul City Hall and Deoksugung palace, Seoul Museum of Art (SEMA; 61 Deoksugung-gil, Seosomun-dong, Jung-gu) has an art library and rotating exhibitions, including a permanent exhibit of Cheon Kyeong-ja’s vivid modernist paintings. Don’t miss out on a walk along Cheonggyecheon en route to Insa-dong, a craft center with wooden teahouses and stalls selling traditional masks and hand fans.

Where to eat: For an alternative to pojangmacha, Chờp Chờp (46 Supyo-ro, Euljiro-dong) is made of sturdier stuff than tarp but is nonetheless a casual spot to enjoy Vietnamese dishes. Bánh mì, a hearty sandwich filled with numerous shredded ingredients, makes a delicious lunch with a Saigon Special beer. Continuing the Asian culinary tour, DimDimSum (63 Sogong-ro) serves delicious versions of these bamboo-steamed Chinese dumplings in the Siumei Shinsegae department store.