From cacti gardens to bunker views and street art, this is where Barcelonians hang out. 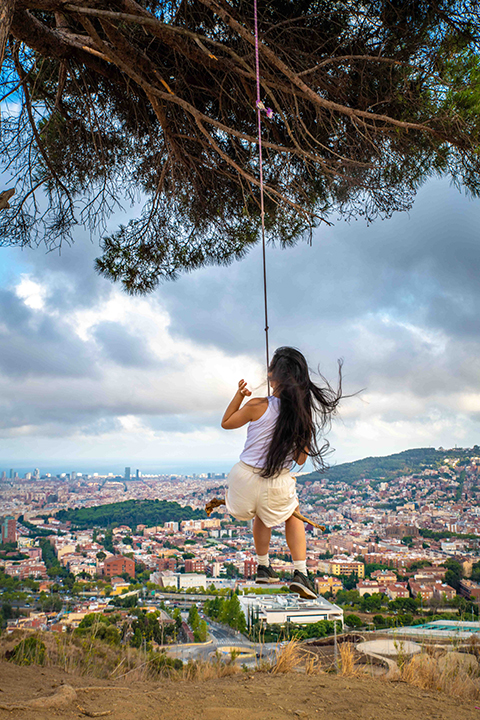 As locals will tell you, there’s a lot more to Barcelona than the Sagrada Família and Las Ramblas. That’s why we’ve gone in search of local favorites you’ll want to take the time to explore. From the city’s coolest neighborhoods and secret parks to its most culturally significant works of art—plus everything in-between—this guide is sure to help even the most seasoned travelers find something new to marvel at.

Our advice? Pack comfortable shoes and get ready to explore. 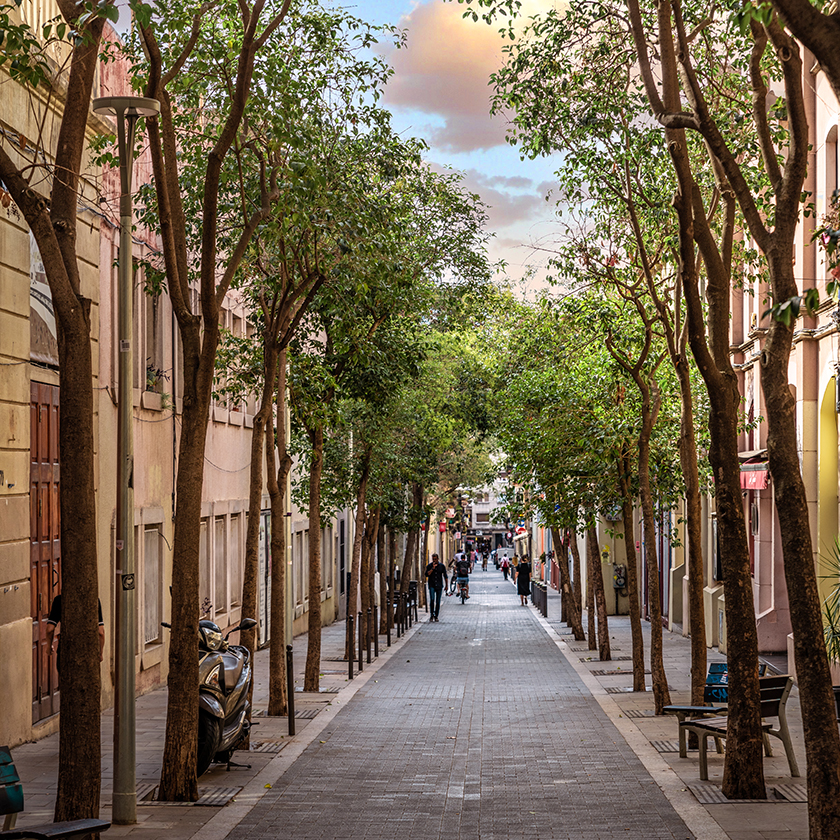 Gràcia is just one stop up from the top of Passeig de Gràcia, but it feels like an entirely different world. And in a way, it is. Gràcia used to be an independent municipality until the 19th century, when it was annexed by the Catalan capital. It kept its independent spirit however, and today attracts the young and trendy to its pedestrianized streets, intriguing shops, brightly colored buildings, and charming cafés.

In Gràcia, you’ll also be able to walk in the footsteps of Antoni Gaudí, Barcelona’s foremost and most influential architect. Forego busier landmarks in favor of Casa Vicens Gaudí (Carrer de les Carolines), the architect’s first house. This Moorish-influenced building matches his more prominent landmarks in craftsmanship and bold vision and is a maximalist design dream.

Once you’ve had your Gaudí fill, visit the shops along the main boulevard, Gran de Gràcia, or get lost in the tiny backstreets behind the boulevard and explore what’s in-store at the local boutiques. Be sure not to miss out on Carrer de Verdi either, where bars vie for space with independent shops of all descriptions. When you’re at your limit, drop your bags and order a cortado from one of the neighborhood’s many terrace cafés. Take in the caffeine and soak up the atmosphere in one of Gràcia’s main squares, such as Plaça del Sol, Plaça de la Vila de Gràcia, or Plaça de la Virreina.

For a different, lesser-known approach to Gaudí’s legacy, take a stroll through Parc de la Ciutadella in the El Born district, one of the city’s most historic and liveliest areas. Worth noting—even as a student, Gaudi was able to help design the park’s iconic fountain, Cascada Monumental (Parc de la Ciutadella, Passeig de Picasso). From there, you have some options. You could immerse yourself in the hustle and bustle of Via Laietana, take in the Plaça de Santa Maria and its beautiful basilica, or indulge in one of the many tapas bars. No matter what you choose, the area’s artistic vibe will be sure to enhance any experience.

Like many of the gardens in and around Montjuïc, the Jardins del Teatre Grec, or Greek Theater Gardens (Passeig de Santa Madrona), was created to celebrate the 1929 International Exhibition that was held in Barcelona. Open to the public, the gardens are the perfect place to escape the crowds of the Catalan capital. Take a book and plan a picnic, enjoy the peace and quiet in the rose garden, then gaze across Barcelona’s skyline from the terraced viewpoint area. 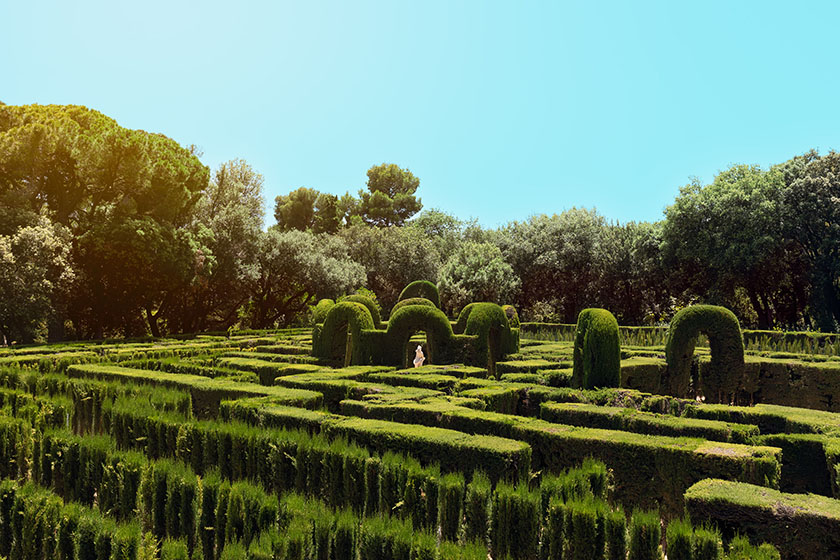 If you feel like losing yourself in a Wonderland-style maze, then Parc del Laberint d’Horta (Passeig dels Castanyers) should be at top of your list. As the city’s oldest garden, it’s beauty is capable of surprising even lifelong locals. Before attempting to make your way to the center, get your bearings straight by standing on the large terrace overlooking the gardens.

Another little-known garden is the Jardins de Mossèn Costa i Llobera (Ctra. de Miramar). Situated on a mirador just a few minutes from the city center, this sea-facing garden is sheltered by Montjuïc and offers a panoramic view of the city’s coastline and port. The gardens host an impressive collection of tropical, desert, and high-mountain plants. This treasure trove of cacti and succulents is actually Europe’s largest collection of cacti, with some species reaching over 16 feet tall.

Insider tip: Visit the Parc del Laberint d’Horta on a Wednesday or Sunday, when the entrance fee is waived.

View from the top

Perched high above the Carmel neighborhood, the Bunkers del Carmel at the Turó de la Rovira (Carrer de Marià Labèrnia) these historic fortifications offer an unparalleled view of the cityscape. Do as the locals do and plan on taking in the sunset. Pack a bottle and some bites and watch the sun sink into the sea. 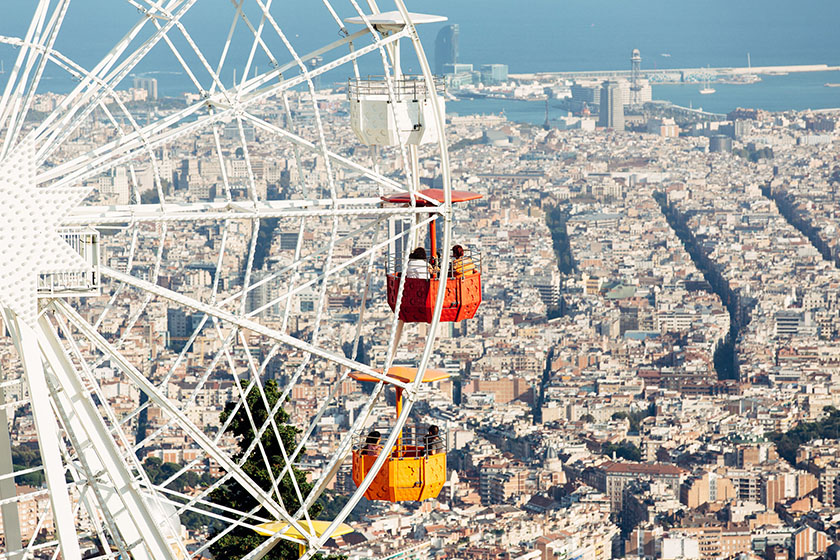 More magical views can be enjoyed from the panoramic area of Tibidabo (Plaça del Tibidabo), the highest point of the Serra de Collserola Natural Park. Positioned 512 meters above sea level, you’ll see Barcelona spread out below you in all its glory. While rides such as the Giradabo and other attractions found in Barcelona’s famous amusement park next door require an entrance fee, the panoramic space itself is free to access. While you’re here, be sure to visit the Temple Expiatori del Sagrat Cor de Jesús (Church of the Sacred Heart of Jesus) and the Jardines del Vivero de Can Borni which are both absolute must-sees. 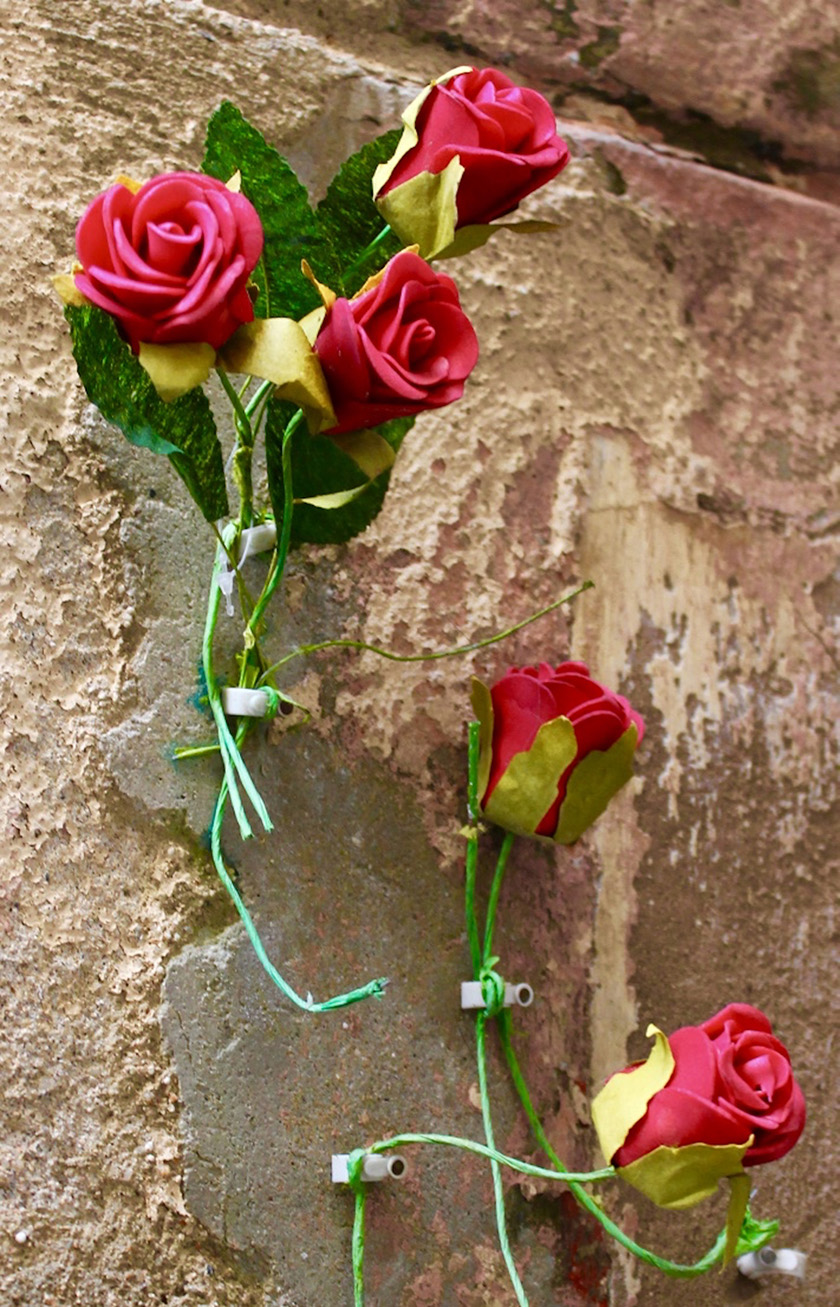 With so much culture packed into one city, it should come as no surprise that Barcelona is one of the world’s top 10 street-art destinations. Make your way towards the Catedral de Barcelona (Carrer de Milans) to find the photo mosaic known as El Món Neix en Cada Besada (The World Begins With Every Kiss) mural. Originally created as a temporary exhibit for Catalonia Day in 2014 but never taken down, the mural is made up of 4,000 tiles with photos printed on them. When viewed from afar, the tiles show two people kissing.

Another stop worth making is La Carbonería (Carrer del Comte d'Urgell), an abandoned coal factory in the Eixample district that features a stunning hot-air balloon painted on its façade—one of the most photographed murals in Barcelona. For an open-air gallery packed with highlights, head to the El Raval district, where you’ll find both world-famous works as well as pieces by up-and-coming artists. Look out for fish characters by world-renowned street artist PEZ, as well as more psychedelic and tribal forms of expression with the occasional dash of the abstract, courtesy of H101, another well-known artist. If you’re worried about getting lost in the winding maze-like streets, several companies in Barcelona host excellent guided tours.

Insider tip: If you’re in the El Born neighborhood, walk its streets after dusk when the local shops close – many of the area’s best graffiti works can be found on the shutters!