From galbi gardens to the Itaewon dining district, Seoul’s restaurant scene is full of local and global delights. 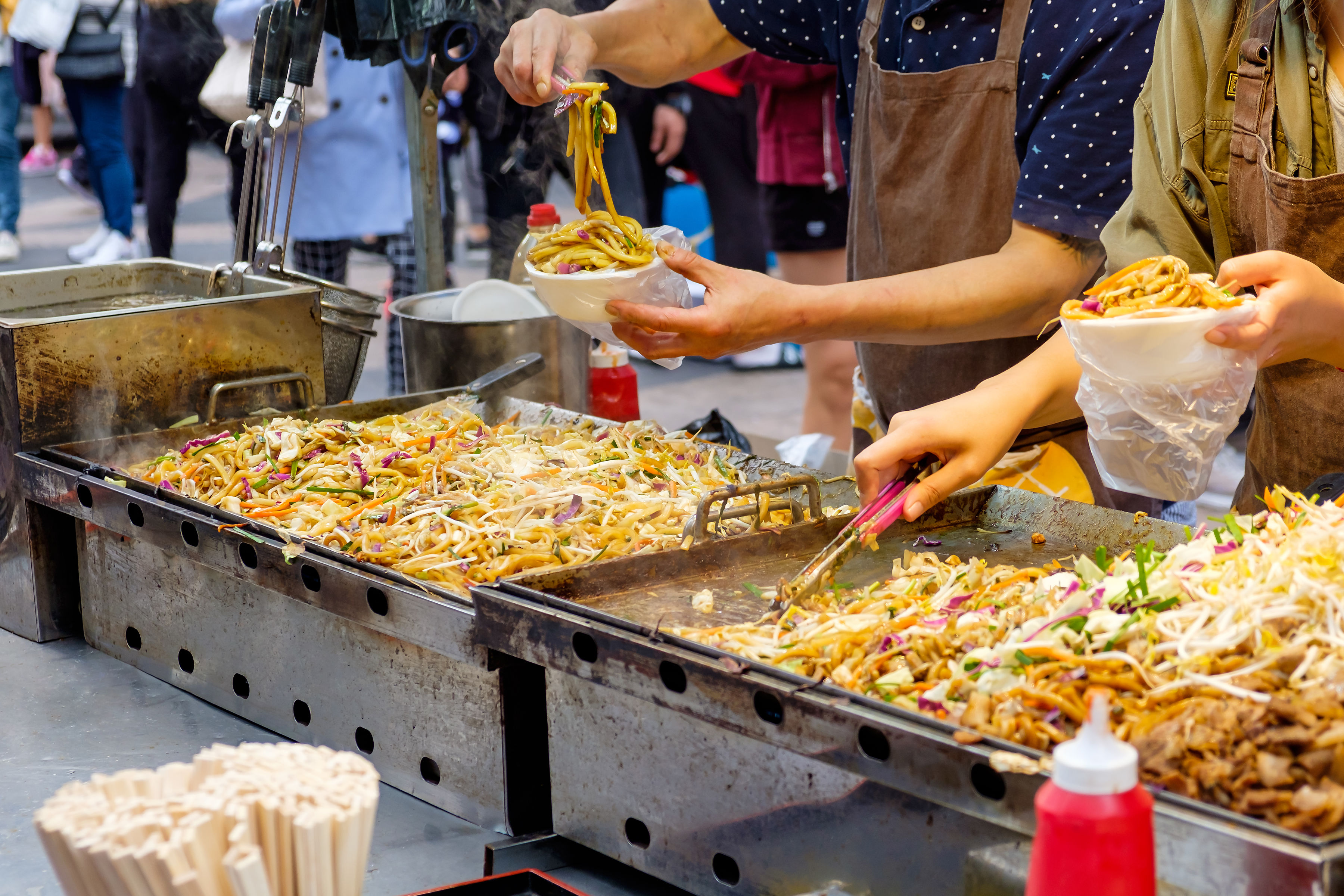 Dip into Seoul’s delicious dining scene and you’ll soon discover there’s a whole lot more to Korean cuisine than kimchi. Dining experiences range from snacking at street stalls on delicious morsels like hotteok (sugar-filled dough cakes, crispy and hot from the griddle), to slurping steaming bowls of spicy noodles, or enjoying hanjeongsik—a traditional set meal with an abundance of banchan side dishes. Seoul’s restaurants are also truly international and experimental, with fusion hits such as KoMex that pairs Mexican cuisine with Korean ingredients.

Korean cuisine draws on centuries of tradition and culture. Spices, seasoning, and fermentation are used to both preserve ingredients and provide a flavor kick to meat and vegetables in popular dishes, ranging from kimchi jjigae, a spicy stew made from fermented cabbage and pork slices, to bulgogi, thin strips of marinated beef that are barbecued and garnished with sesame seeds and spring onions. 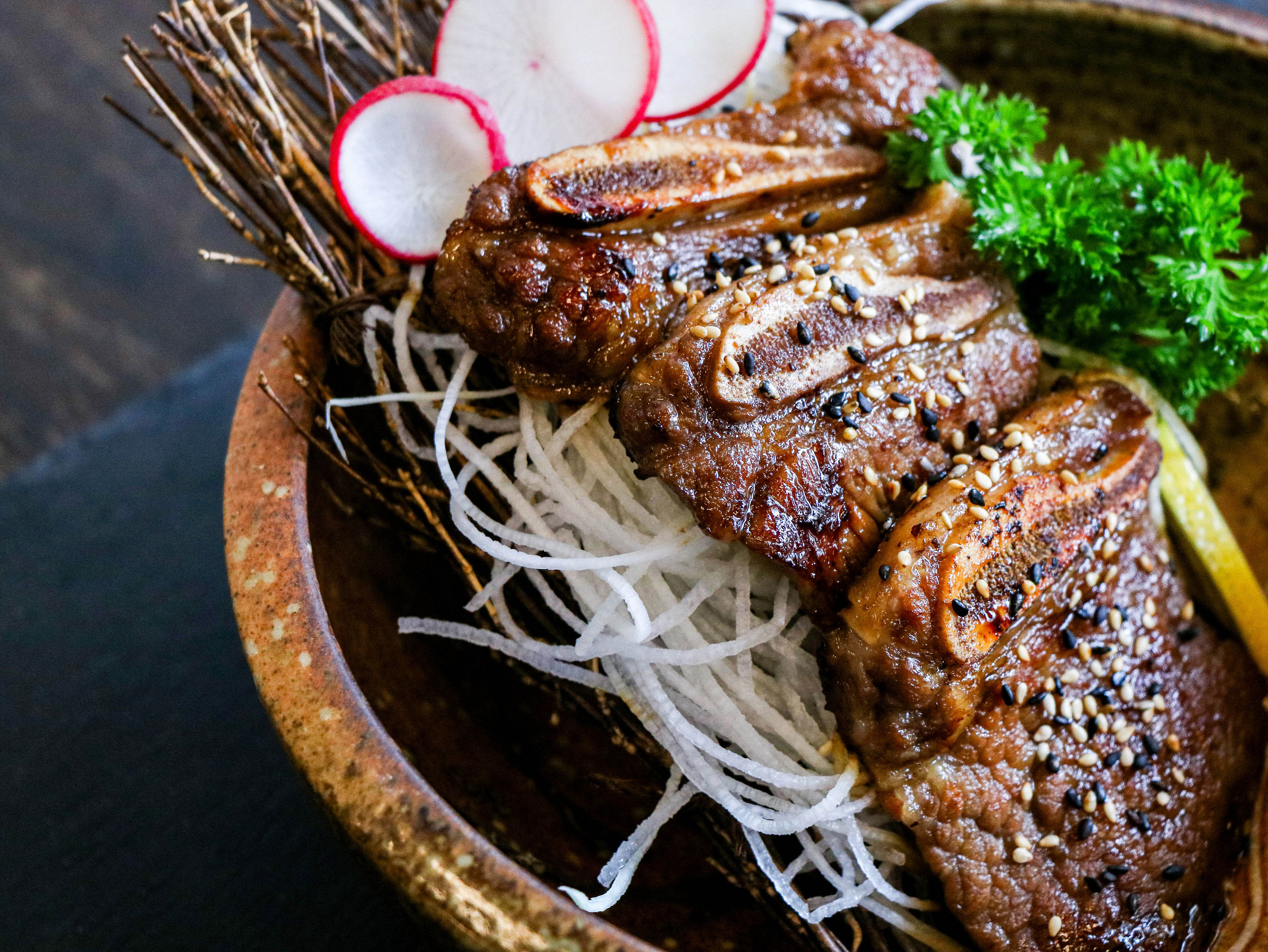 One of the most renowned traditional meals is galbi—barbecued marinated beef or pork ribs. Specialist galbi restaurants, like Gangnam’s Samwon Garden (835 Eonju-ro, Apgujeong-dong), have their own closely guarded methods for preparing the meat prior to it being barbecued. This is done over a charcoal brazier at the diner’s table, with the succulent pieces of cooked meat wrapped in a lettuce leaf and eaten by hand. The elegant Samwom Garden, which includes a beautifully illuminated garden with a waterfall, serves top-quality beef and a full spread of complimentary side dishes.

Another icon of Seoul’s dining scene is Tosokchon (85-1 Chebu-dong, Jongno-gu), located a block west of Seoul’s main palace, Gyeongbokgung. Occupying a series of connected hanok (old wooden houses), this restaurant specializes in a superior version of samgyetang. A whole small chicken is stuffed with sticky rice, garlic, nuts, Korean dates, and ginseng, then boiled to perfection in a broth of ginseng, ginger, and other herbs. There’s usually a long line of people waiting to sample Tosokchon’s samgyetang, but it’s worth joining them, as the line moves fast enough. 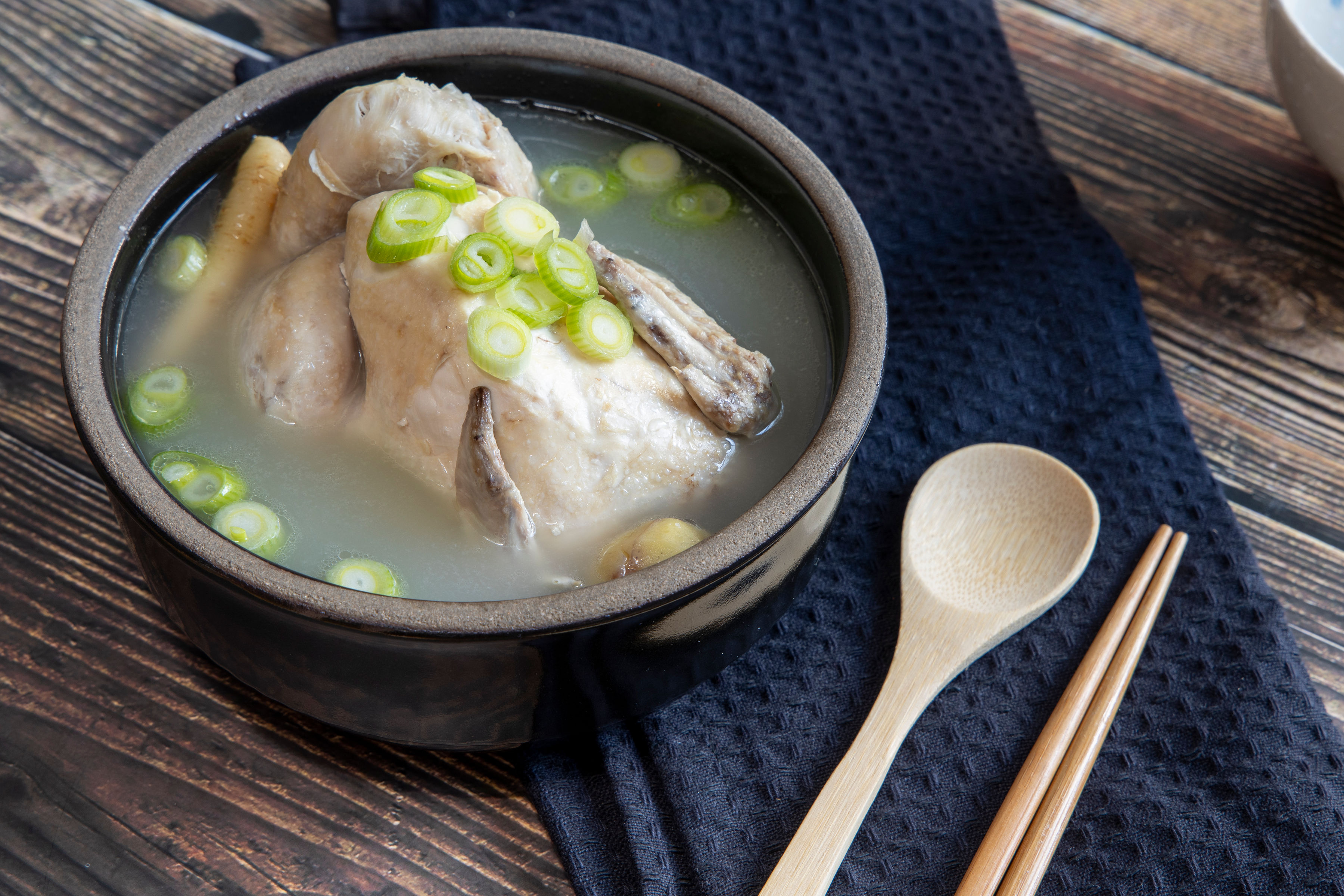 Woolaeoak (62-29 Changgyeonggung-ro, Jugyo-dong, Jung-gu) is one of Seoul’s most timeless restaurants and has been famous for its naengmyeon (cold buckwheat noodles) since the late 1940s. The noodles are served in a tangy beef broth, topped with slivers of radish and pear, and the soup is then flavored with vinegar and mustard. 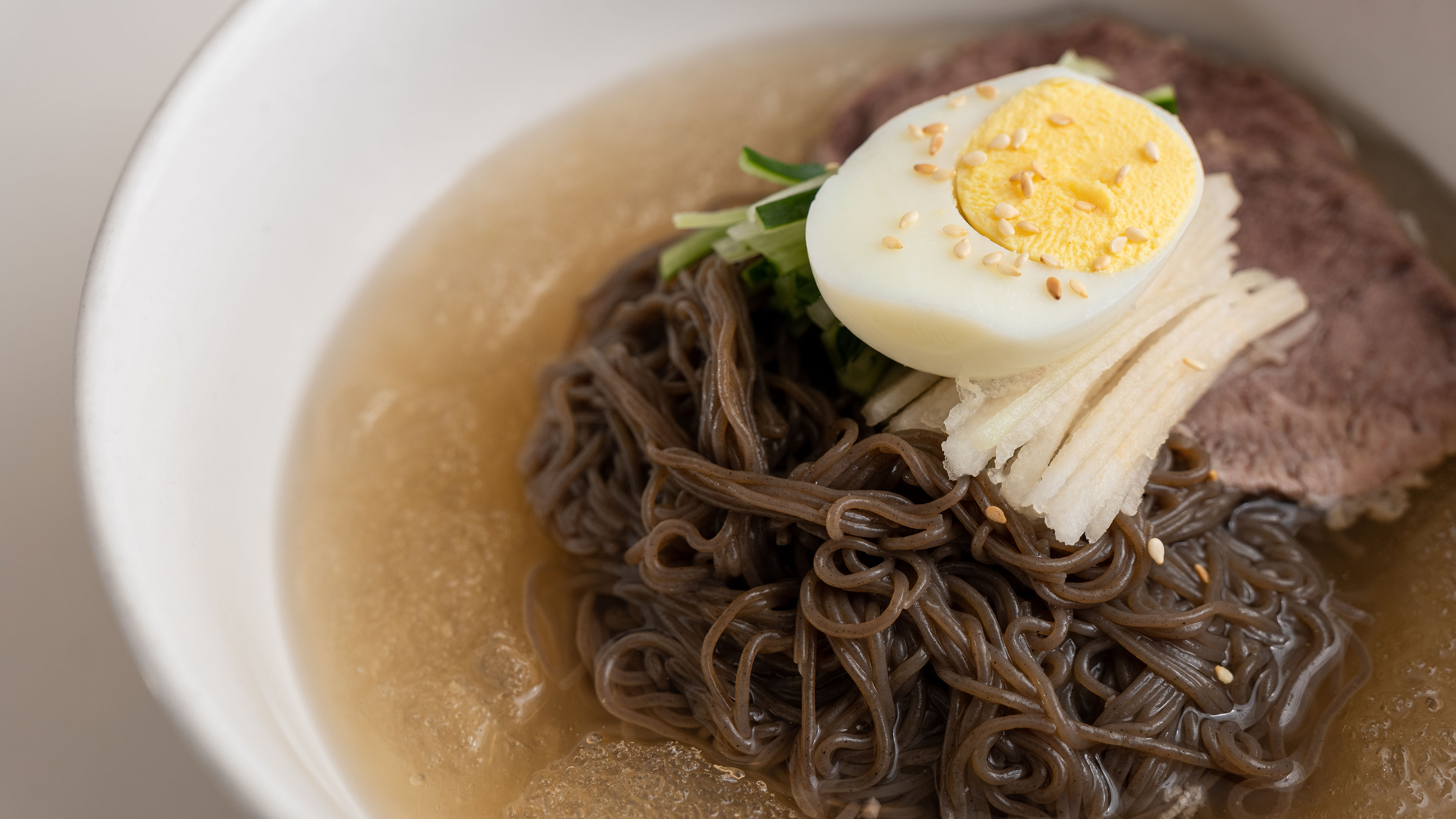 Insider tip: For authentic local eats, head to Seoul’s street stalls and pojangmacha tent bars. They keep late hours and are common in the Insa-dong and Myeong-dong areas.

A traditional Korean meal almost always comes with rice, soup, and a variety of banchan. The more formal the meal, the more banchan will accompany it. The aim is to achieve a pleasing balance of color and taste, with common ingredients including various fermented products, like kimchi and doenjang bean paste. 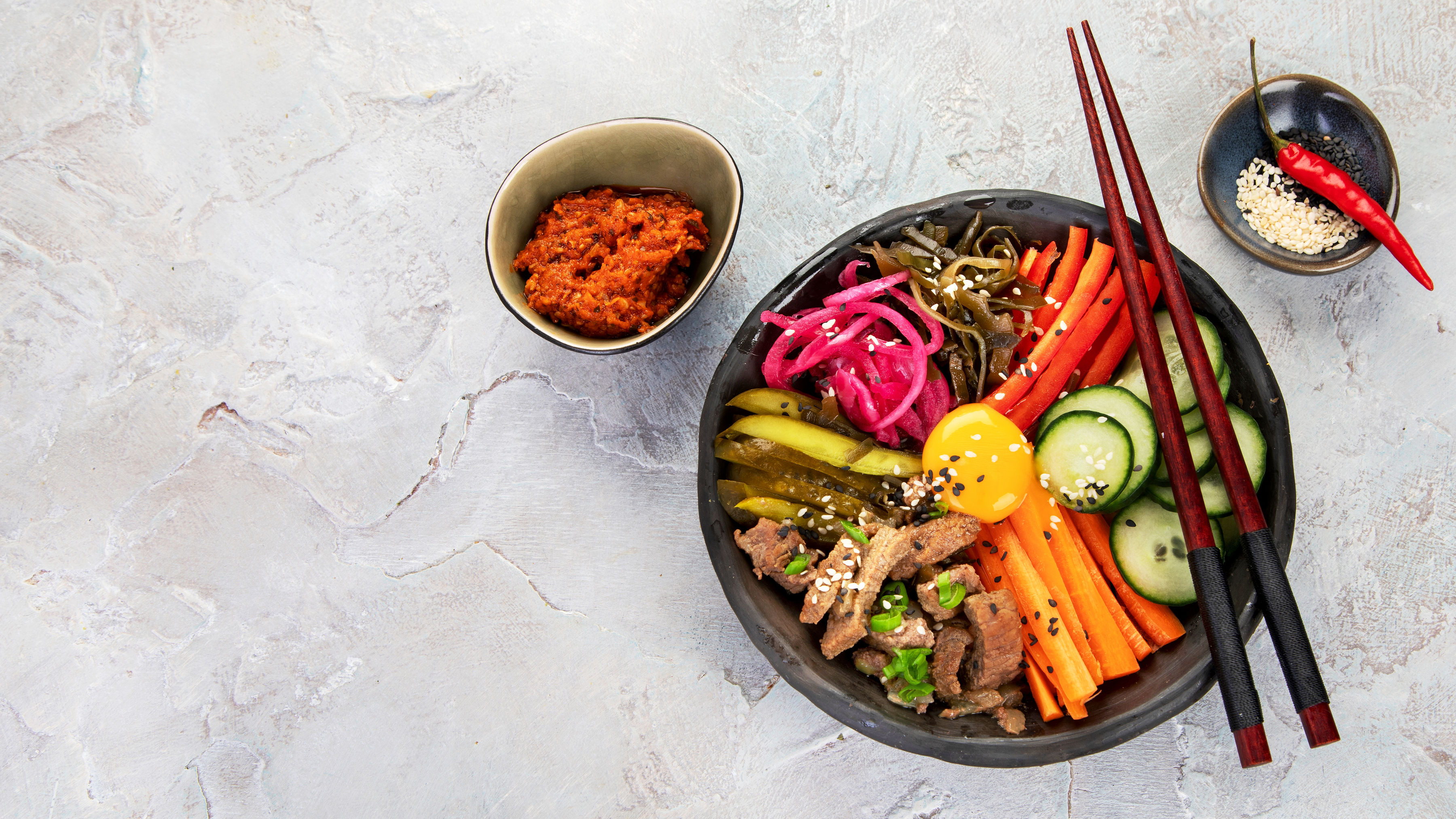 Bibimbap A bowl of rice topped with vegetables, meat, and a fried egg, this savory dish is all stirred together with a dollop of red-pepper paste. A delicious variation is dolsot bibimbap, served in a heated stone pot that crisps up the outer layer of rice.

Gimbap Similar to a sushi roll, this dish consists of rice flavored with sesame oil, then wrapped along with strips of vegetables, fried egg, and meat or seafood, in sheets of dried seaweed.

Kalguksu Translating literally as ‘knife-cut noodles’, these handmade wheat noodles are usually served in a broth flavored with anchovies, shellfish, and seaweed.

Kimchi The most common type of this fermented pickle is cabbage seasoned with garlic and crushed red pepper. There are, however, more than 200 variations, using different vegetables and fermentation processes.

Southwest around Namsan Hill, the dining and bar district of Itaewon has a distinctly international flavor, due to its proximity to the Yongsan-Casey US Army base. Although the base is closing, Itaewon remains the best location in Seoul to enjoy everything from halal Malaysian and Middle Eastern food to all the delights of European kitchens. Vatos Urban Tacos (1 Itaewon-ro 15-gil, Yongsan-gu) is particularly popular, which began as a food-truck operation selling Mexican tacos with a Korean twist. They’re best known for soft corn tortillas filled with slices of galbi beef ribs, and kimchi carnitas fries, a mound of French fries covered with pulled pork, kimchi, cheese, and other toppings.