When the heat intensifies in North India, escape to these hotel pools and shade-blessed holy sites.

India’s Golden Triangle, the ever-popular travel circuit linking Delhi with Agra and Jaipur, offers a panoply of Hindu temples, vibrant markets, ancient monuments, and intriguing culture. The area tops most visitors’ North Indian itineraries, taking you in the footsteps of everyone from traditional sadhu ascetics to the ancient Mughal Empire, whose Islamic rulers made capitals in Agra, Delhi, and Fatehpur Sikri. The temperature generally sits between about 60º F and 100º F here, so if high temperatures bring your sightseeing to a halt, take a break at the area’s coolest hotel pools and sun-sheltered temples. 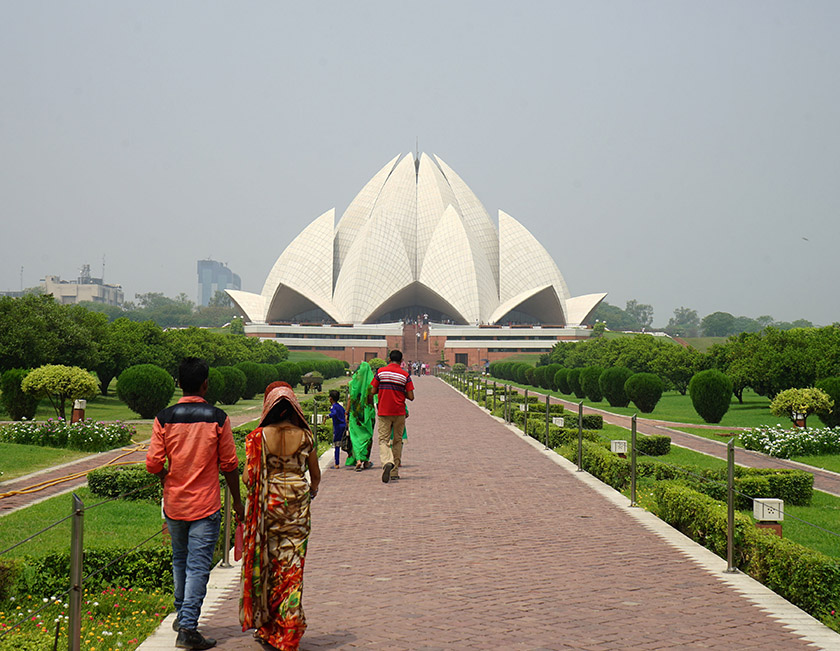 From the moment you touch down and head into Delhi on roads filled with weaving auto-rickshaws, the North Indian metropolis is a sensory carnival. Whether you’re wandering the markets and Mughal forts of Old Delhi, or snacking on spicy chaat street food, you’ll find this burgeoning megacity to be fast-paced, multicolored, and vivid. All of which can be overwhelming at the height of summer, when temperatures over 100º F are another factor to acclimatize to.

However, respite is available at temples and religious sites, which offer cool spaces for peaceful contemplation, such as New Delhi’s pond-ringed Lotus Temple. Like a mystical subcontinental Sydney Opera House, this Baháʼí temple welcomes all comers to its vast hall beneath 27 marble-clad “petals,” comprising one of the world’s most-visited buildings. More than 10,000 daily visitors pass through the expressionist structure dating to 1986. One of only seven major Baháʼí houses of worship worldwide, the water-cooled atmosphere of silent meditation is the perfect antidote to Delhi’s heat and clamor.

Inspired by the five elements, chic boutique hotel The Park New Delhi is an oasis of calm in this city of 30 million people. During the scorching Indian summers, the best element to embrace is water, and there's plenty of that in the sparkling pool surrounded by crisp white loungers and cabanas. Grab a frosty drink at Aqua outdoor bar or swap the sun's rays for the dark blues and sand-colored marble floors of Mediterranean restaurant Mist.

Cool off in Agra

Agra is famous for the marble mausoleum of the Taj Mahal, but locals associate the Uttar Pradesh city more readily with the smoggy heat that dominates life on the Yamuna riverbanks. It’s a popular stop between Delhi and Varanasi or Central India, with majestic Mughal monuments, Kinari Bazaar’s cornucopia of market stalls, and several spots to escape the heat. 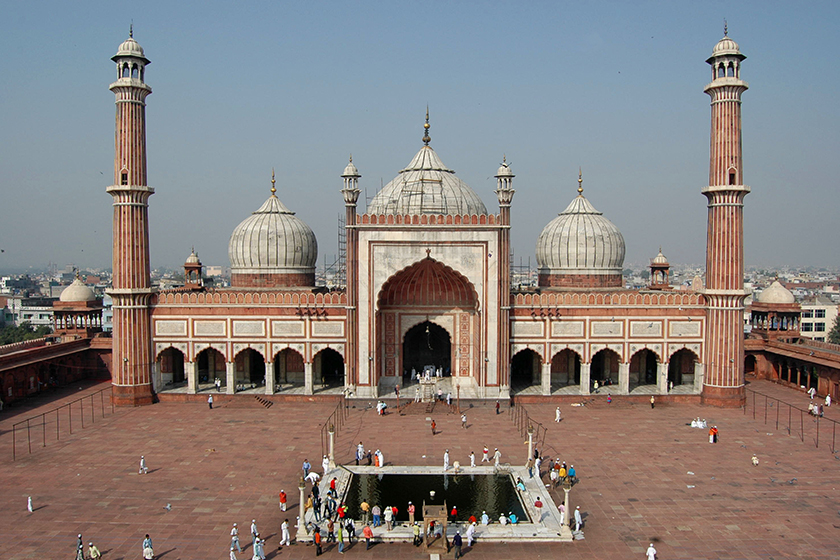 Near the bazaar, Mughal princess Jahanara Begum commissioned the 17th century Jama Masjid mosque, identifiable from its three bulbous domes patterned with sandstone-and-marble zigzags. Once connected to the 16th century Agra Fort, it’s one of India’s largest mosques, with plenty of shady spaces beneath its interior arches and the cloisters bordering its expansive courtyard. If you take a day trip to the fortified Mughal city of Fatehpur Sikri, there’s another, equally impressive Jama Masjid (the name means “Friday mosque” in Arabic) with an Indo-Islamic design and the tomb of Sufi saint Shaikh Salim Chishti. 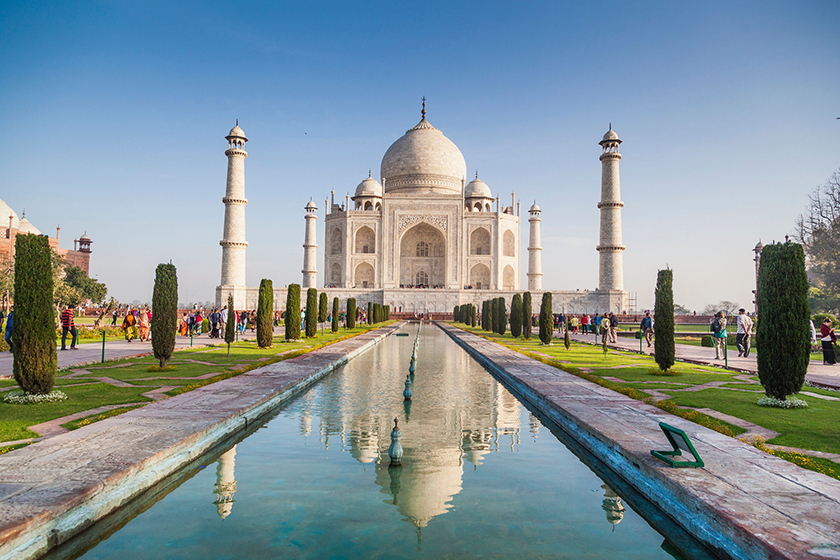 In the pressing heat of summer, finding a base to cool off is a must, and the Radisson Hotel Agra has modern, air-conditioned rooms with plenty of space to relax. Book a room with a Taj view to make the most of your visit. The hotel also has a stunning rooftop pool, perfect for lounging under an umbrella and enjoying views down the Yamuna River.

The saffron-colored gateway to Rajasthan, Jaipur is known as the “Pink City” for its ochre facades, such as Hawa Mahal palace’s honeycomb of latticework windows. It’s an appropriately colorful introduction to the northwestern state, home of blue pottery, yellow saris, the Amber Fort, and the orange dunes and fiery sunsets of the Thar Desert. 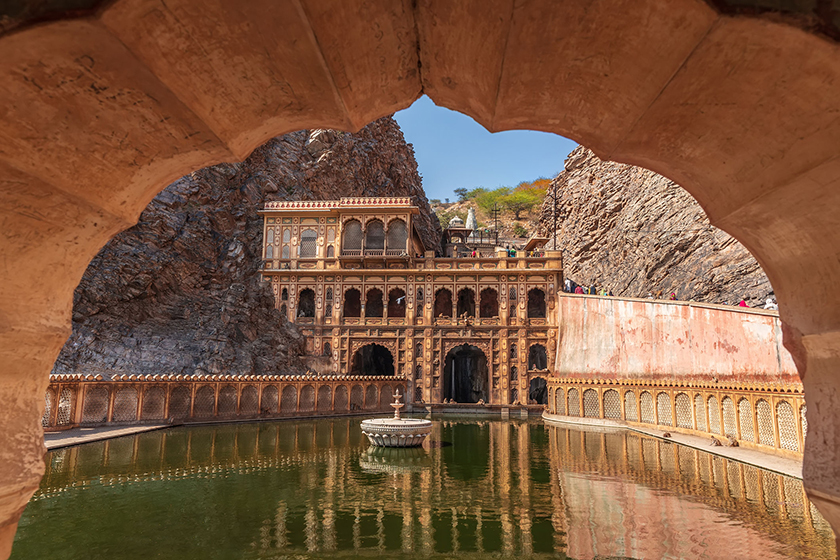 While ethereal scenes undoubtedly await, Jaipur is as busy and buzzing as every other Indian state capital, so a trip out of town to the Hindu pilgrimage site of Galtaji offers welcome relief. Dramatically located in a rocky crevice of the Aravalli Hills, the 15th century complex of domed pavilions is famous for its seven spring-fed holy ponds, in which pilgrims bathe. Look out for original frescoes in temples devoted to Hindu deities Krishna, Ram, and monkey-headed Hanuman (the latter attracting hundreds of macaques and langurs) and climb the ridge to find the Surya Mandir temple dedicated to the sun god Surya. 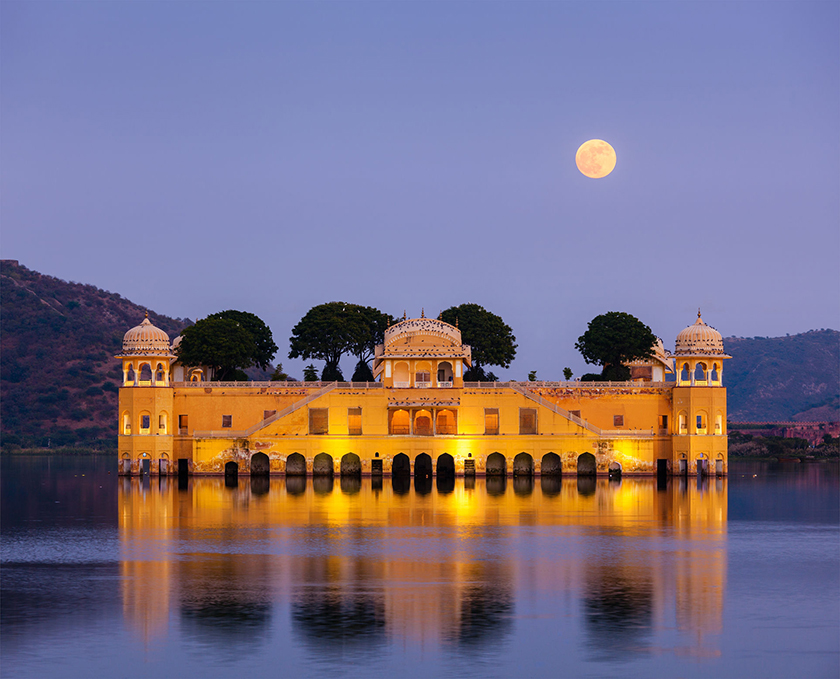 Indian architects have had centuries to perfect the art of beating the heat, and the Trident Jaipur’s designers took notes with the pool courtyard's latticework “windows.” The intricate Rajasthani architectural staples let in the breeze, but keep out the sun. Similarly, the hotel’s arcaded towers and veranda allow constant cool airflow, mirroring the state’s forts and palaces, such as the seemingly floating Jal Mahal in neighboring Man Sagar Lake.