Twelve dates for your calendar

We appreciate that most people go on vacation to get away from their busy schedules and calendars full of commitments, but there are some annual cultural highlights in Croatia that’ll give you brilliant insight into local life and traditions. We’ve picked one event each month that’s worth attending if you happen to be visiting at that time of year.

Night of the Museums, nationwide

What started in 2005 as a small-scale cultural evening in Zagreb when six museums welcomed visitors late into the evening has evolved into a nationwide celebration of the arts, with more than 200 museums and galleries taking part. From modern art by up-and-coming talent in Dubrovnik to prehistoric finds in Zagreb, the permanent collections and special exhibitions span time and space. Most venues stay open until 1:00 AM and many towns and cities provide free transport between institutions.

The annual celebration of the city’s patron saint has been held on the streets since AD 972 and it was recognized as a UNESCO Intangible Cultural Heritage event in 2009. St. Blaise helped the people of Dubrovnik defend their town against the Republic of Venice, and observant visitors will notice that his statue adorns city walls and squares across Dubrovnik. Festivities begin on February 2nd with the release of white doves in front of Orlando's Column, followed by feasts, religious processions, and family-friendly events. With red flags hanging over streets and locals dressed in traditional folk costume, it’s difficult not to get swept up in the sense of celebration.

It’s well worth making the 40 minute coastal drive from Dubrovnik to celebrate St. Joseph’s Day in Mali Ston and join hungry revelers who descend on the pretty town to slurp oysters, sip delicious local wine, and enjoy live music. In an area where the fresh water of the Neretva River meets the Adriatic, the water conditions are perfect for growing the large, sweet oysters that are shucked in the thousands during the one-day celebration. Don’t expect any fancy embellishments and seasonings with your oyster, as locals prefer to keep things simple with a simple twist of lemon.

For most people, running a 100 mile mountainous route is the opposite of what they want from a vacation. But for the 1,700 competitors who sign up for one of Europe’s toughest trail endurance races, this is a highlight of their year, and is certainly a unique way to explore Croatia’s landscapes. Starting in the ancient town of Labin in eastern Istria, the course begins with a steep climb up Učka mountain before winding its way towards the walled 10th century town of Umag, where finishers can dive straight into the crystal-clear Adriatic. If this sounds like your kind of thing, be sure to sign up well in advance.

Covered in pine forests, vineyards, olive groves, and charming villages, the island was named Korkyra Melaina (Black Corfu) by the ancient Greeks after its black pine trees. Locals believe in many myths and legends, and over the centuries it’s become a belief that Marco Polo was born on the island (despite historical records showing he was Venetian). Regardless of the truth, it doesn’t stop the islanders from celebrating his birth at the end of May with street parties, town feasts, and historic enactments. It’s an awful lot of fun that wakes up this otherwise peaceful, sleepy island.

The calm waters of the Bay of Rijeka become awash with colorful sails and spinnakers during the week-long international regatta that takes place in early June. While professional sailors enter the official races between Rijeka and Omišalj, budding amateurs are encouraged to get involved too. In fact, the event’s slogan has been “Got a boat, got a sail, sign up!” ever since its inception in 1999. For non-sailors, plenty of events and activities take place back on dry land and it’s a great excuse to explore Croatia’s third-largest city.

Credited as the oldest and largest medieval summer festival in Croatia, the people of Rab have been marking the date that they were liberated from the Venetians since 1364. For centuries, the celebrations would involve two weeks of feasting and prayer, but today the revelry has been condensed into two days of medieval merriment. Most of the celebrations center around the harbor and lanes of the old town, so be sure to stop by and witness the jousting and crossbow exhibition held by the Association of Rab Crossbowmen.

You’ll start to understand that Croatians have a deep-rooted link to the past and this event near Split is yet another fine example. If you find yourself in the city in early August, it’s worth making a beeline for the small town of Sinj just 35km northeast to step back in time for the annual jousting tournament. The first recorded event took place in 1715, and very little has changed since. Knights on horseback armed with lances aim to hit the inside of a metal ring (the alka) at full speed, with points awarded based on which part of the ring they hit. It’s a simple concept that’s more thrilling to watch than it sounds!

The forested expanse between the small Istrian towns of Pazin, Buje, and Buzet has become the center of Croatia’s annual truffle season. The exact location of the best areas for finding the prized fungi is still kept tightly under wraps by local hunters, who take their dogs deep into the woods early each morning. Their finds can be enjoyed in restaurants across the region, with shavings of the black variety added to most local dishes for an earthy umami hit, while the hallowed white Alba truffle is usually kept whole and sold at auctions to the highest bidder. 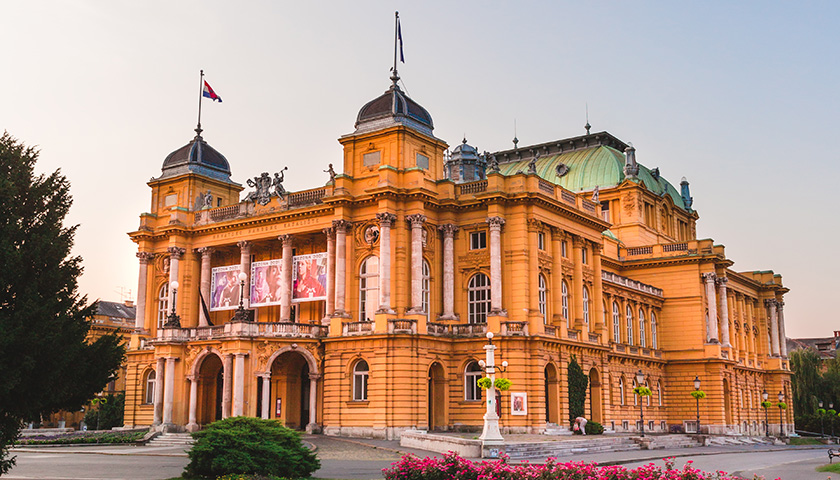 Taking its cue from the well-established Night of the Museums, this cultural calendar highlight sees theaters and cultural hubs throw open their doors for a series of special performances, workshops, discussions, and interactive events for all the family. It has become a Europe-wide initiative and many of the theaters collaborate with production companies across the continent to stage one-off shows.

Croatians take Christmas seriously and, while most cities settle for a single Christmas market, Zagreb hosts more than 25 separate wonderlands. With the temperatures dropping low enough to warrant endless mugs of mulled wine, the streets and squares are covered in decorations, and stalls sell handmade crafts and local delicacies to visitors from across the globe. Live music and carols can be found at Ban Jelačić Square in the run-up to the big day, and kids will love the Jolly Christmas Tram that offers 30 minute rides through the streets. The markets usually start on the Saturday before the first Sunday of Advent and run until the first week of January.