Blue skies and sunshine make spring one of the best times to visit, explore, and eat in the Eternal City.

The sun is usually shining during spring and early summer in Rome, but the summer holiday crowds are absent and the temperatures much gentler than the heat of high summer. Food markets are laden with local produce from Lazio—including fat globe artichokes, cherry-red strawberries, and broad beans. To celebrate the onset of spring, the Spanish Steps are adorned with pink and white azaleas for several weeks from early April. 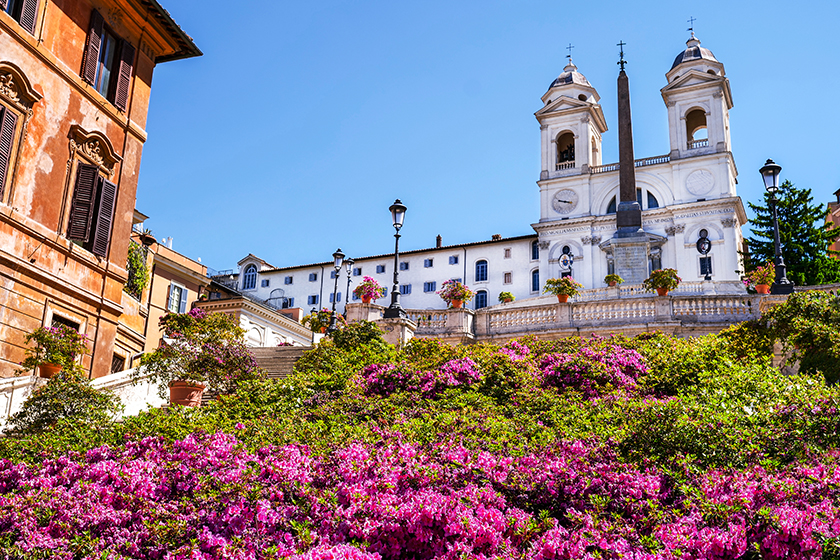 For views over peach-tinted domes and the graceful grids of central Rome’s townhouses, climb the Spanish Steps, linking Piazza di Spagna with the church of Trinitá dei Monti. It’s always a beautiful sight, but in April, the steps are even more spectacular, covered in more than 300 pink and white azaleas to welcome spring, a tradition going back almost a century.

Rome has some especially lovely parks that burst into color at this time of year, chief among which is the Villa Borghese, with an entrance close to the top of the Spanish Steps. Here you can wander, picnic, and hire bikes in what was once the private gardens of Rome’s most powerful family. Afterwards, it should be warm enough to eat outside on the lovely terrace of Mirabelle restaurant with astounding vistas over Rome’s rooftops or stop for a drink at the classic Harry’s Bar on Via Veneto, a key location for Fellini’s La Dolce Vita. 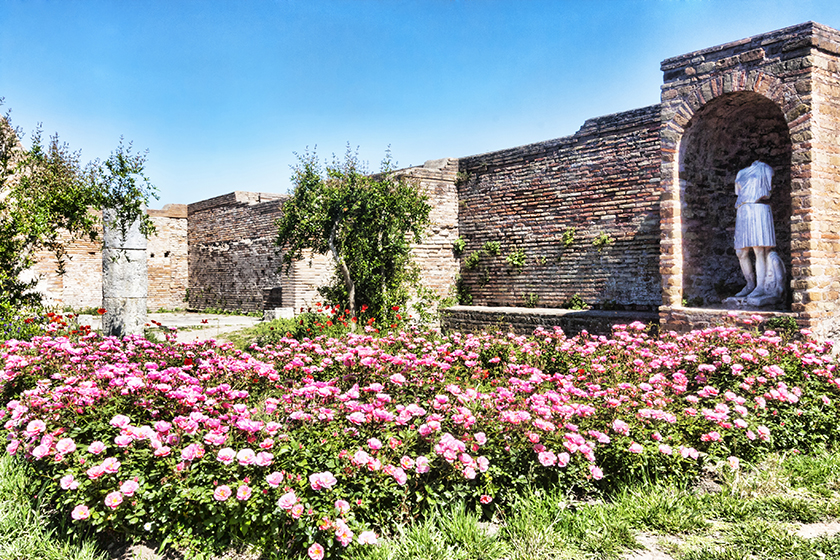 Rome’s Rose Garden, Roseto Comunale, is located on the eastern side of the Aventine Hill overlooking the Circus Maximus and opens in late April. The fragrant roses here are at their finest until mid-June. A short distance away is the Orange Garden (Giardino degli Aranci), officially named Savello Park, where you’ll find fragrant orange blossoms and more stunning panoramas. From here it’s a particularly scenic walk down to the picturesque district of Trastevere just over the Tiber, where you can enjoy wisteria in bloom across its ochre townhouses and sample local wines accompanied by antipasti at Enoteca Trastevere. 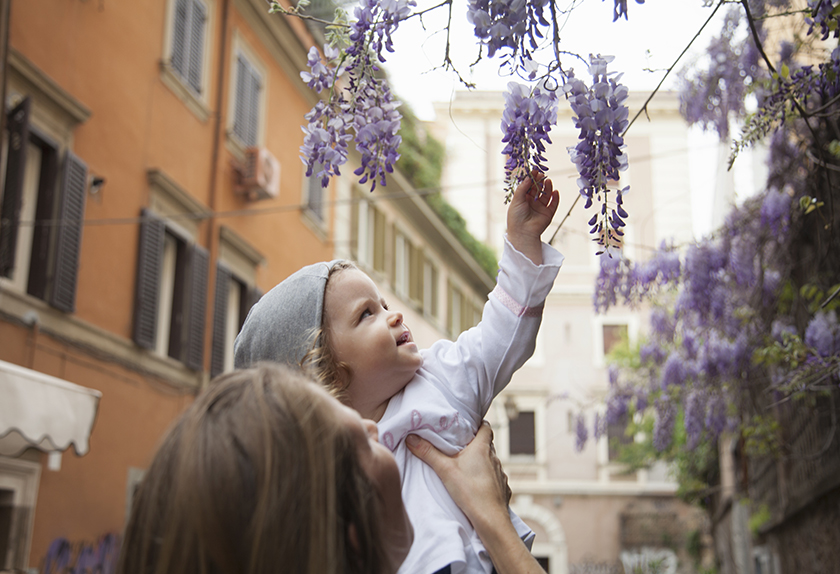 Insider tip: Great places to eat and drink after you’ve taken in the views from the Spanish Steps include Hotel Hassler’s Michelin-starred Imàgo restaurant at the top of the steps (be sure to ask for a table with a view). For a late afternoon tea with plenty of 19th century atmosphere, Babington Tea Rooms is right next to the foot of the staircase. 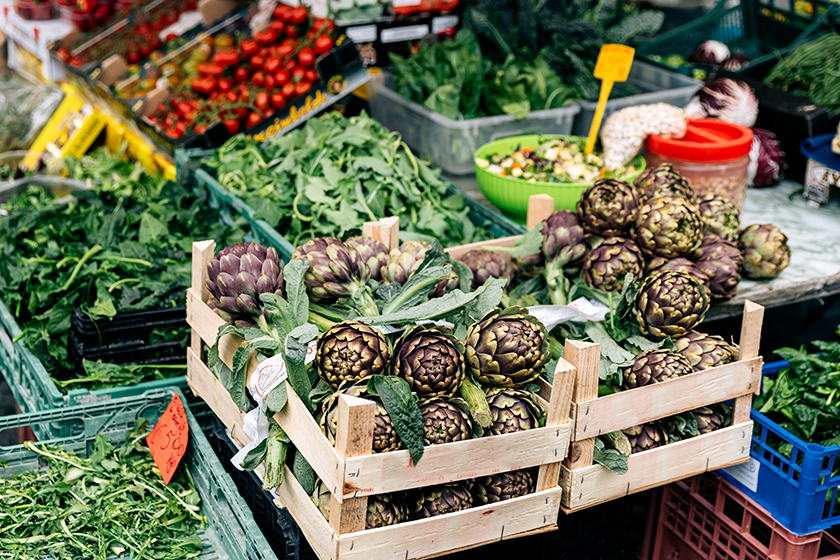 Spring is also one of the most thrilling times to eat in Rome and browse the neighborhood food markets, which are piled high with colorful, flavor-packed local produce. You’ll find wild strawberries, tender asparagus, and grass-green fava beans. On May 1st, it’s tradition to eat fava beans fresh from the pods, alongside a tangy, salty local pecorino (sheep’s cheese).

Spring is also prime time for one of Rome’s favorite foodstuffs, Lazio’s plump globe artichokes, which appear in the markets and on tables from March onwards, and there are several time-honored ways to enjoy them. Deep-fried carciofi alla giudìa is a Roman-Jewish dish where the chef flattens the artichoke, deep-fries and salts it, creating a deliciously crispy tangle of flavor. Carciofi alla Romana are “Roman-style” artichokes that are braised and cooked with mint, lemon, and parsley until they’re as tender and sliceable as butter. If you eat artichoke alla Vignarola, you’ll find it tastes like spring itself.

Campo dei Fiori (Field of Flowers) in central Rome is the city’s most famous market, and here you’ll see the stalls groaning with flowers, artichokes, peas, and broad beans. After seeing the ingredients laid out at the market stalls, enjoy traditional Roman cuisine at Osteria da Fortunata, just off the square, where you can try artichokes cooked alla giudìa, Romana, or Vignarola, as well as other traditional spring favorites. 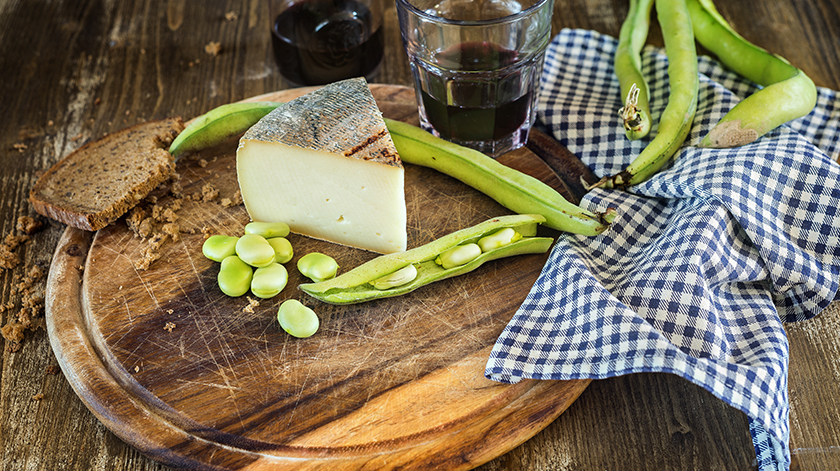 Equally renowned among Rome’s central food markets is Testaccio, close to Rome’s former slaughterhouse and long the homeland of true Roman cuisine. At “Nuovo Mercato di Testaccio,” you can sample the cheeses and cured meats on sale, as well as the mountains of spring vegetables.

Insider tip: After visiting Testaccio, eat at one of the area’s traditional Roman restaurants that specialize in dishes for carnivores, which in springtime means one thing above all else: abbacchio (roasted lamb) served with potatoes, and fragrant with rosemary.