Dining in Delhi is a whirlwind tour of the flavors of India, from lavish fine dining to the subcontinent’s most inventive street food. 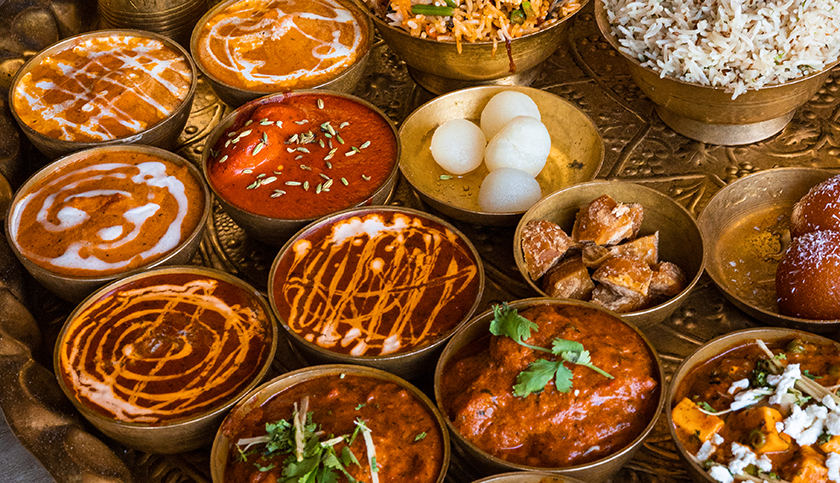 Thanks to centuries as the royal seat of sultans and emperors, Delhi brings the best of India’s cuisines together in one fabulous fusion. The Indian capital is famously fast-paced and frenetic, but its diverse culinary influences have found the time to blend into a lavish symphony of flavors that are best sampled in fine-dining restaurants and the street food served in Old Delhi’s maze-like bazaars. A visit to Delhi is a voyage of gastronomic discovery, where even eating at a roadside stall can be a five-star experience.

Tastes from across the subcontinent spill out into the streets in Delhi, from South Indian dosas (savory crêpes made from fermented rice and lentils) to Bengali fish curries, but it’s the flavors of North India that linger on the palate. As the principal city on the Grand Trunk Road that links Afghanistan and Bangladesh, Delhi has long embraced the sensational cuisine of India’s northwestern Punjab state: kulcha (leavened flatbread) and paratha (layered, unleavened flatbread), chole bhature (spiced chickpeas with fried bread), and moist, flavorsome meats fresh from the tandoor (clay oven). 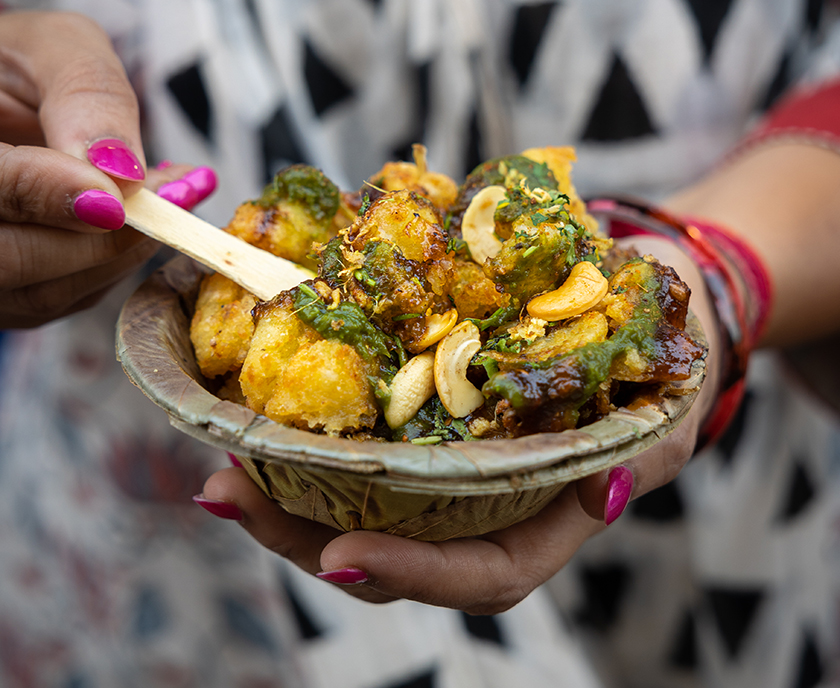 For street food, look no further than the knotted bazaars that sprawl around Chandni Chowk, the bustling marketplace running west from the Red Fort. Here you’ll find hole-in-the-wall eateries and streetside stalls serving everything from stuffed parathas to the sweet fried-dough whorls known as jalebis.

To taste the best of Delhi, hit the backstreets, where blink-and-you’ll-miss-them workers’ canteens and food stalls serve the city’s most authentic eats, such as the following dishes. 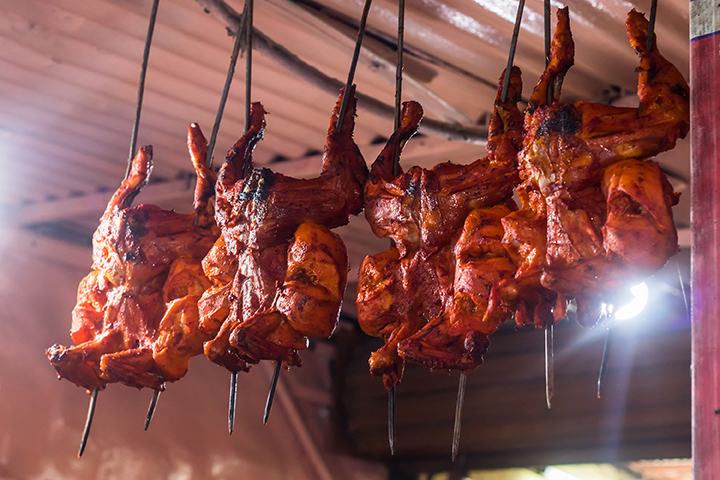 Tandoori chicken – Not so much a dish as a national obsession: moist, tandoor-roasted chicken, marinated with yogurt, spices, garlic, and ginger (enjoy it with a squeeze of lime juice).

Chole bhature – Flavorsome stewed chickpeas with complex spices, served with a fried puri flatbread for dipping. An authentic taste of the Punjab, beloved by truck drivers on the Grand Trunk Road.

Lamb burra – A favorite of Delhi’s Muslim community since Mughal times. An artful blend of spices, rubbed into lamb cuts that are then barbecued over charcoal. 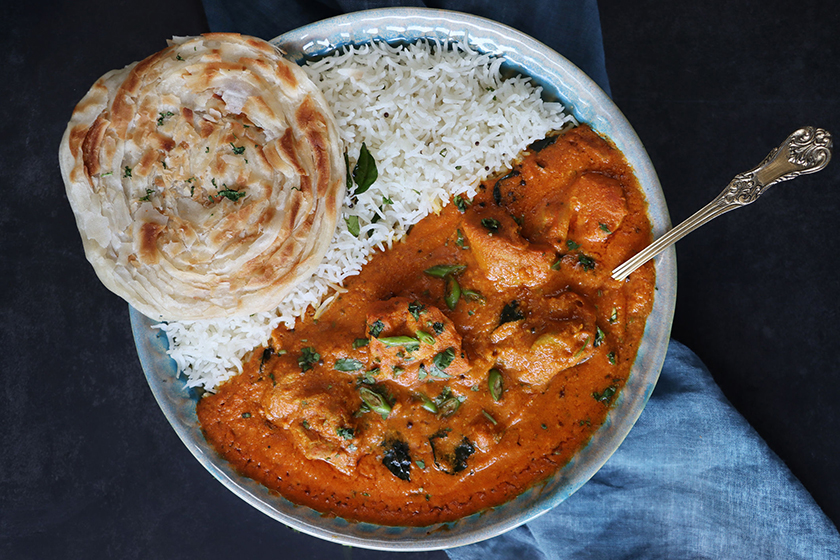 Butter chicken – A never-let-you-down classic of tandoori chicken pieces, served in a sauce rich with spices, tomatoes, and butter. Invented by chefs at Delhi’s Moti Mahal restaurant in the 1950s.

A taste of the world 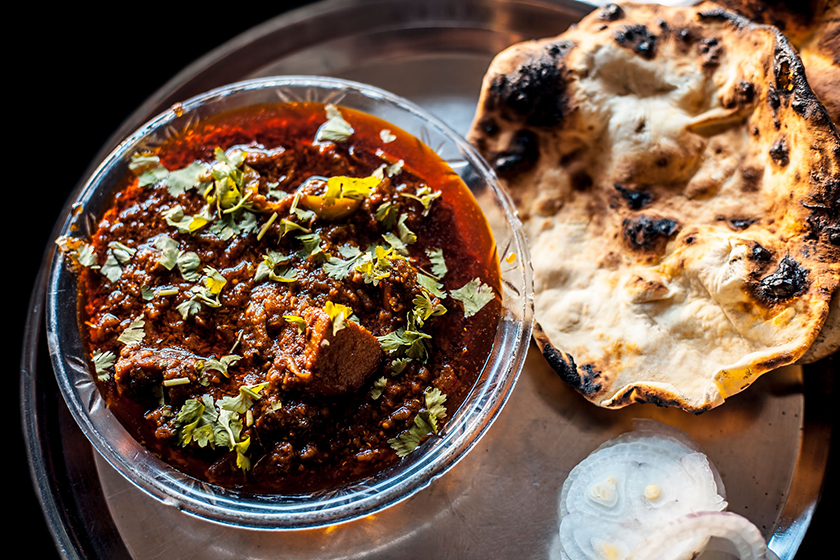 Coming to Delhi without sampling the fabulous, fiery flavors of North Indian cooking would be unthinkable, but the Indian capital has more up its sleeve than chili, cardamom, and coriander. Many mid-range restaurants celebrate a triptych of cuisines—Indian, Chinese, and Continental. But to enjoy the latter two categories at their best, seek out eateries that make an artform of a single cuisine or region.

Fusion food is gaining traction all over Delhi, too, with Southeast Asian and European flavors sneaking onto menus. At Bo-Tai (Kalka Das Marg, Seth Sarai, Mehrauli), a chic cocktail-bar-style experience is given extra pep by a sharing-friendly menu spanning prawns with caramelized mango, pork-belly bao, and seared sole with Gruyere fondue.