We sent Italian travel and lifestyle blogger Manuela Vitulli to Taste of Roma to get her take on the Diners Clubmember experience. The following post appeared on her blog, Pensieri in Viaggio, on Oct. 1, 2018, and has been translated and edited for clarity.

I have always enjoyed the Roman gastronomic scene. In the last few years, I’ve been in Rome several times, and between lunches and business dinners, I’ve been able to experience a variety of restaurants—from the most authentic osteria to starred dining experiences. And I realized how much, no matter the price points or the fanciness of the restaurants, Rome’s gastronomic options are always incredibly interesting. At Taste of Rome, I had the pleasure of experiencing it and deepening my discovery.

Thanks to Diners Club® International—a lead sponsor of the event that I’ve collaborated with and for which I’ve been a Clubmember for almost a year—I have been able to live this experience in an even more exclusive way. After getting to appreciate the advantages of Diners Club® International during my trip to New York, in Rome I got to experience my Clubmember benefits at some major events. Let me tell you, from the moment I arrived at the festival until the moment I left, I felt pampered. What I love most about Diners Club is exactly this: It makes Clubmembers feel like they’re part of a big family.

Since the beginning, Diners Club has been linked to fine dining through its support of culinary events, and haute cuisine initiatives. So, it’s only natural that Diners Club decided to be a key sponsor for Taste of Rome, where both emerging and well-established chefs would be showcased. Specifically, 18 top-level chefs delighted and amazed visitors with a 72-course meal prepared on the spot. Delightfully set up in the Auditorium Parco della Musica, the event deepened my appreciation for chefs I already knew and introduced me to new amazing ones. Also, thanks to Diners Club, I was able to interview a few of them and take part in their private tastings.

During the days of the festival in Rome, it was hot—really hot. Luckily, I could always relax and chill for a second at the Diners Club VIP Lounge, an area dedicated to Diners Clubmembers. Within this area, myself and other Clubmembers were able to enjoy an open bar with a selection of four Italian wines and one champagne, paired with finger foods. There were also reservation-only private tastings with chefs, lectures and very interesting panels with industry experts. I attended Adriano Baldassarre of Tordomatto’s lecture, a starred chef known for his traditional, yet creative cuisine. The Diners Club VIP Lounge was a surprisingly intimate, exclusive experience within an already exclusive event.

The Benefits of Diners Clubmembers

In addition to the VIP Lounge, as a Clubmember, I received a €25 card that allowed me to sample a selection of chefs’ dishes, on top of a variety of free specialties including the tonnarelli cheese and pepper with truffle that you see featured here. Anyone who knows me, knows how much I love plain tonnarelli cheese and pepper. Imagine how much I liked them with truffle on top! I even asked for an encore. Two times.

While there, I had the pleasure of interviewing the great Cristina Bowerman, chef of Glass Hostaria in Trastevere, with whom I also share my Apulian origins. I have been hearing amazing things about her for a while, so actually chatting with her about her cuisine was a great honor. Cristina, who in 2010 received her first Michelin star, I think should genuinely be considered a rock star of Italian contemporary cuisine.

During our interview, Cristina shared her concerns that the frenetic pace of modern life is causing people to lose the notion of sharing a meal and being present in the moment. As Italians, the “art of conviviality and of enjoying time at the table” is in our blood, and we should commit ourselves to safeguarding it. I’ll admit that because of work, I also fall into the frenetic rhythms of modern life. But, I fully agree with her and I promise that I will commit myself to preserving that all-Italian conviviality.

Since Taste of Rome revolves around the five senses, I asked Cristina which of her dishes was most connected to a sensory journey. In response, she assured me that all of her dishes revolve around the five senses and, in particular, her signature dish: orzotto as a risotto with cheese and smoked pepper, lemon, sea urchins and San Pietro truffle comb. While you may argue that this dish has a long, complicated name, I can easily describe it in a single word: divine. The signature dish of Cristina Bowerman is divine.

At Taste of Rome, I had the great honor of meeting Heinz Beck, the only Capitoline chef who boasts three Michelin stars. In the past, I’ve tried to book a table at his restaurant, La Pergola, with absolutely no luck. If you want to have dinner there, you have to book months in advance! But thanks to the festival, I was able to taste some of the dishes on La Pergola’s menu. I instantly fell in love with one of the desserts: cream of marzipan ricotta, soft pistachio and candied orange sorbet. Of course, this only amped up my desire to enjoy a full-course dinner at his restaurant.

Last but not least, I saw Roy Caceres, the chef of Metamorfosi, and it was amazing. I have a wonderful memory of enjoying dinner at his restaurant a few months ago. In fact, I think it was one of the most memorable dinners of my life, a true sensory experience.

In 2012, Metamorfosi received a Michelin star—but for me, it’s not about the star. I’ve been to numerous starred restaurants, but I rarely felt a deep soul in those masterful creations. At Metamorfosi, however, I felt exactly that every dish has a story to tell and has a soul of its own.

Drawing on his Colombian origins, Roy infuses each dish with something more—and the results are breathtaking. In that regard, Taste of Rome wasn’t any different, where he featured his signature dishes: a sort of tortilla made with plum of Iberico, grilled peppers, herbs and nigella. The tortilla is supposed to be handheld, wrapped manually (like a Mexican tortilla) and tasted with the whole heart.

Want to check out the original post? Visit Manuela’s blog. 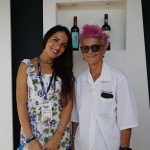 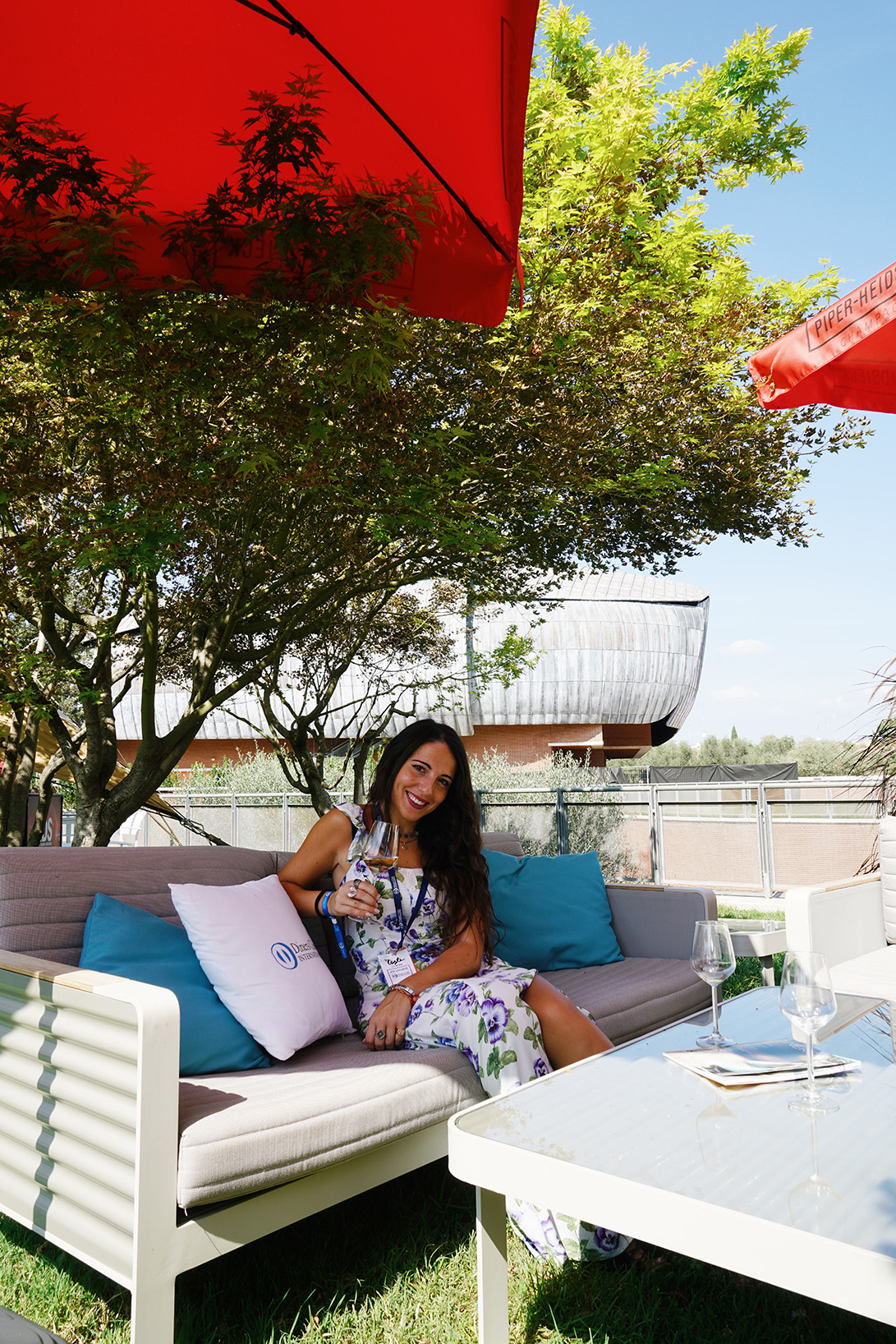 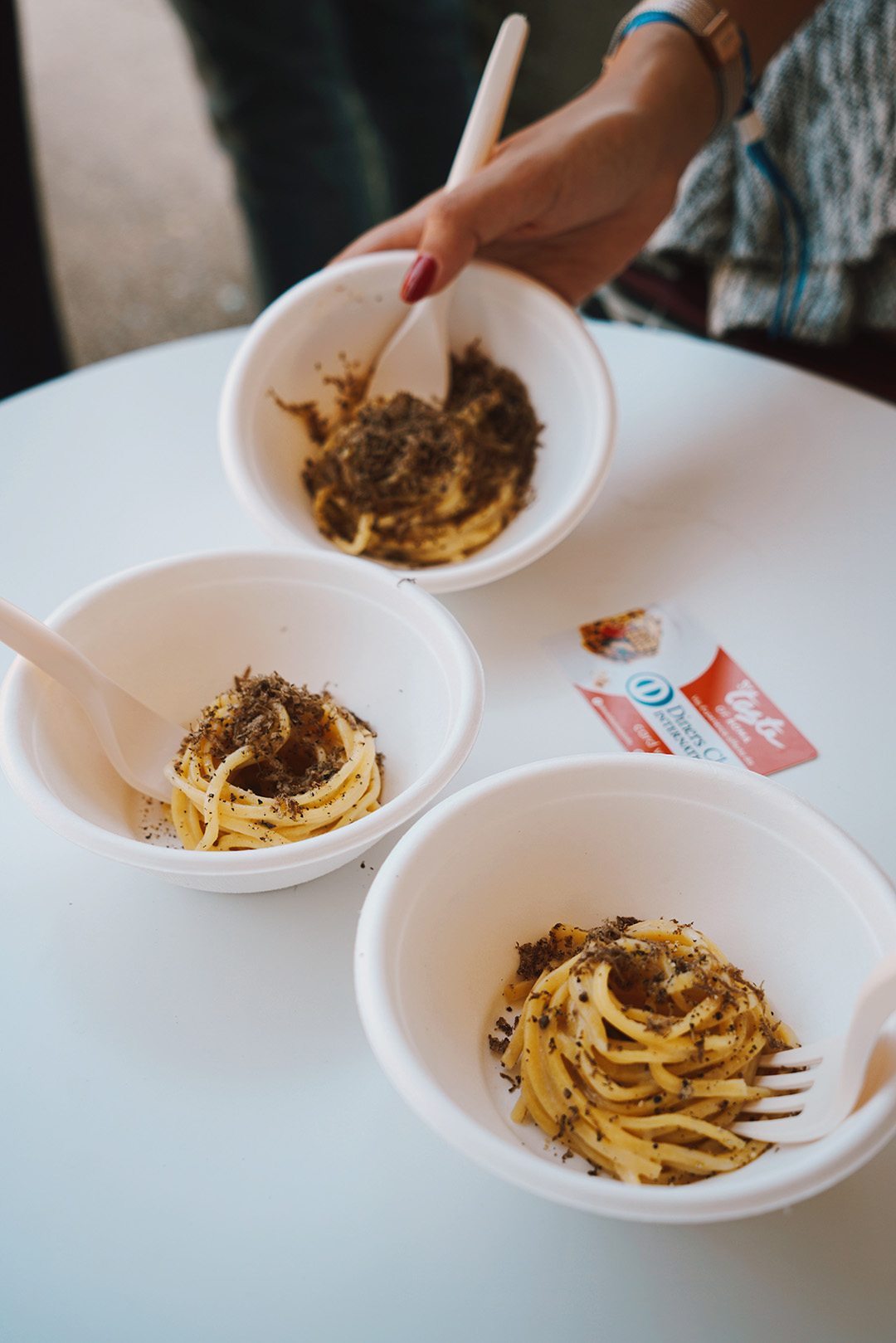 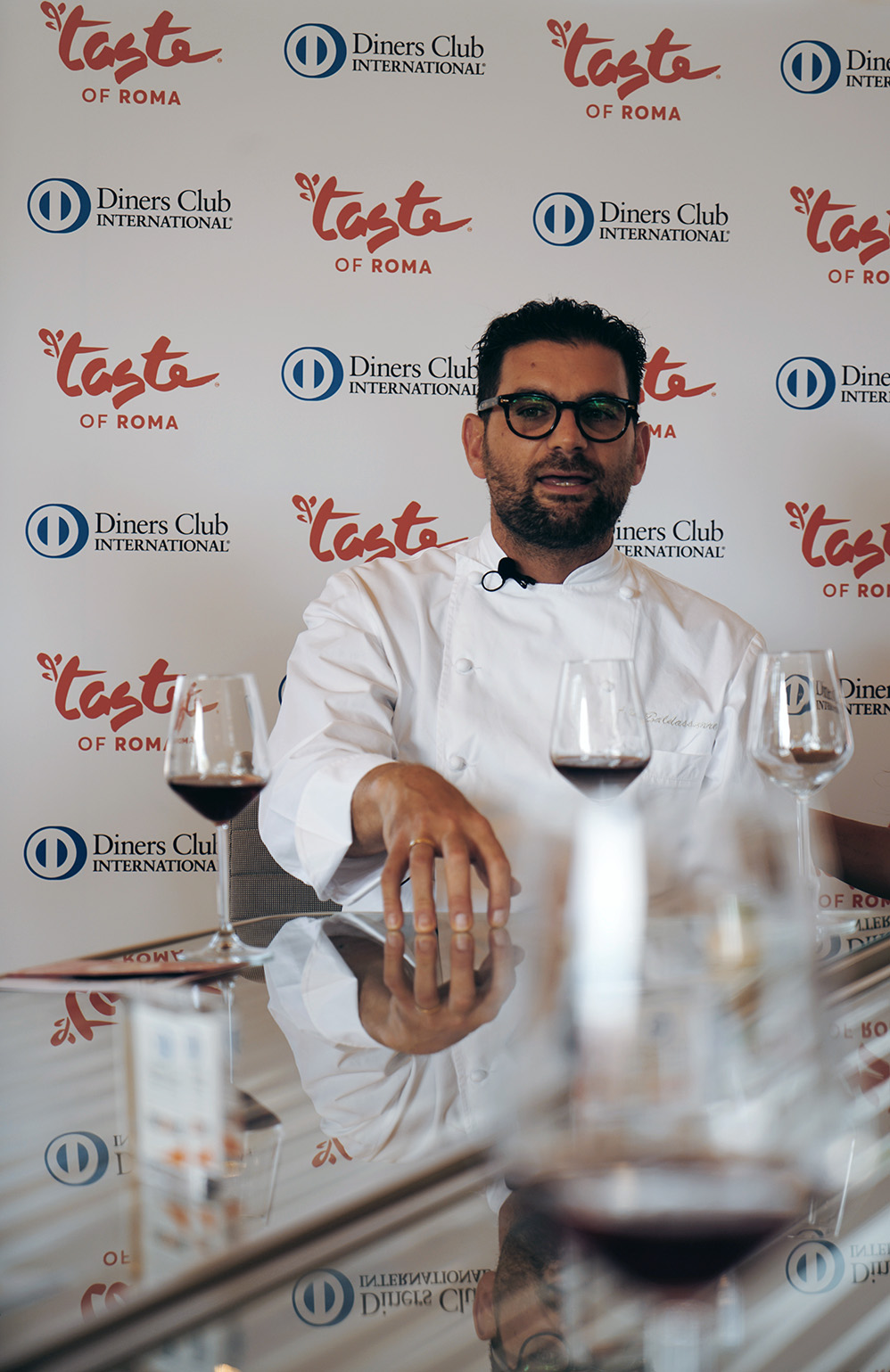 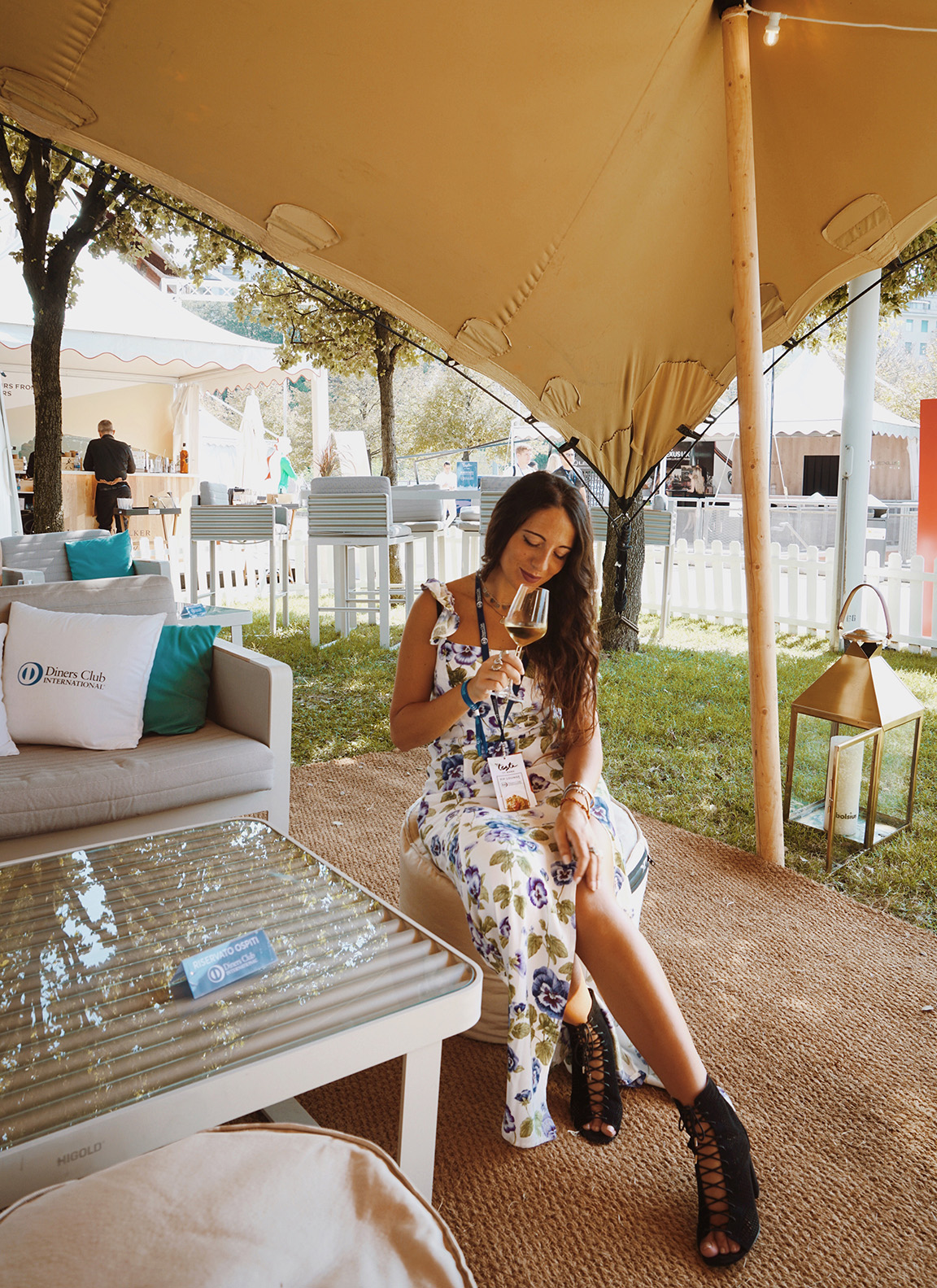 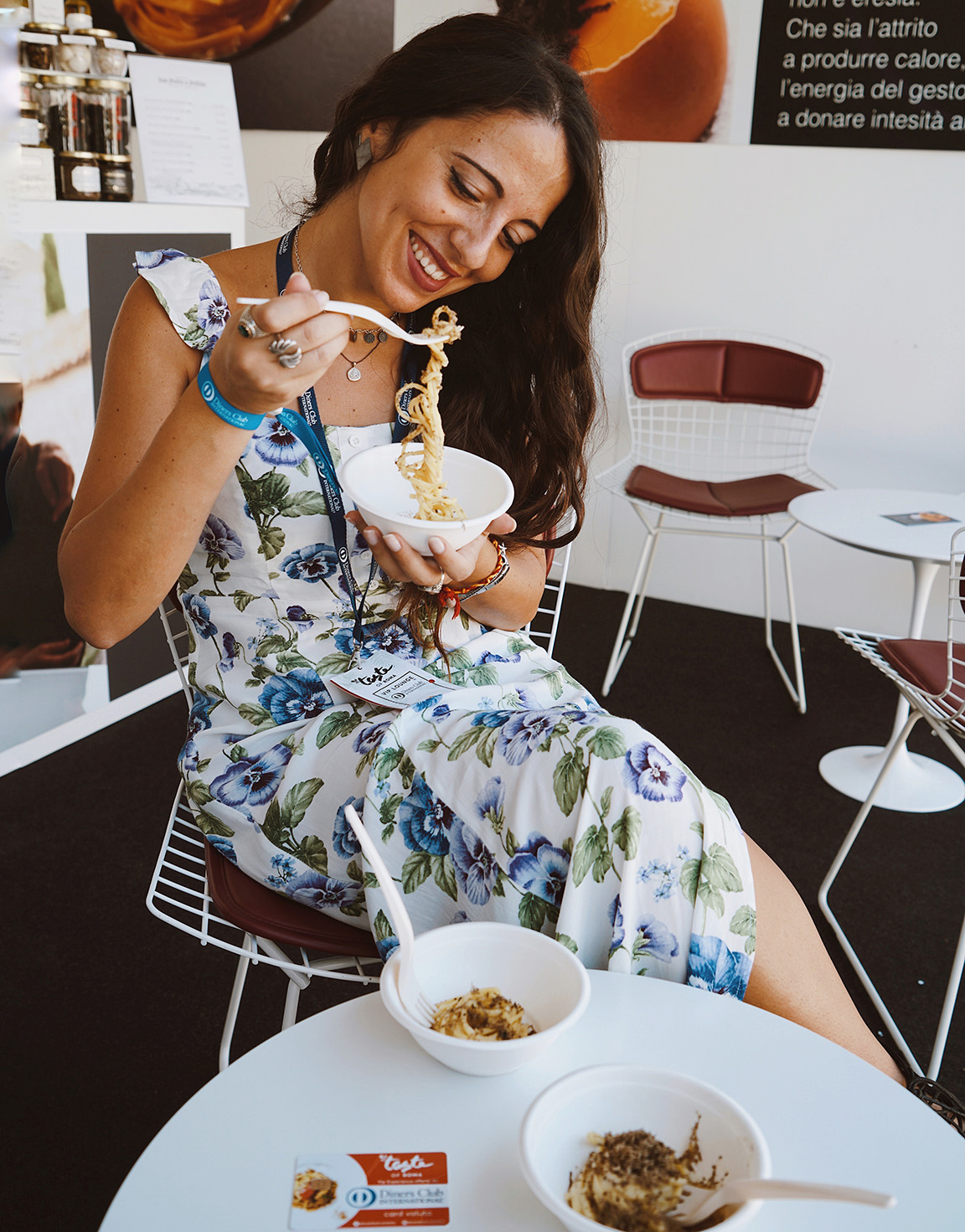 The information provided herein is sponsored by Discover® Global Network. It is intended for informational purposes, and is not intended as a substitute for professional advice. All views expressed in this post are that of Manuela Vitulli and do not necessarily reflect the views of DCI.