With its golden beaches, surf breaks, hillwalking trails, and city parks, the LA area offers a host of outdoor activities to enjoy under the sunny Californian sky.

Home to roughly 10 million people, Los Angeles County is by far the United States’ most populous county, and one of the largest in area. At 4,000 square miles, it’s larger than multiple states, which means plenty of space for outdoor activities. Add in some of the most perfect weather the US has to offer, and you have the perfect environment for adventures—from hiking the Hollywood Hills to surfing the waves off Malibu. But be sure to take a page from the locals and bring plenty of water and sunscreen.

Take a sunset hike to see the Hollywood Sign

Hiking may not be the first thing that comes to mind when you think of LA, but locals are really into it. Runyon Canyon, in the Hollywood Hills, is 130 acres of see-and-be-seen hikers, from folks walking pooches to celebrities in ballcap-and-sunglass “disguises”. Eastward, Griffith Park is seven square miles (five times as big as New York’s Central Park) and 53 miles of hiking trails and inspirational views of the Hollywood Sign and the vast expanse of the LA basin, from Downtown to the shores of the Pacific.

Insider tip: Go at sunset. As daylight dims, city lights below illuminate like a magic carpet, and LA’s pull is palpable. After dark, stargaze through telescopes at the Griffith Observatory.

Locals call it “The Strand” or just “the bike path,” but no matter what you call it, it’s an essential part of LA coastal culture with 22 miles linking the Pacific Palisades in the north with Torrance in the south. Not only does it offer legendary ocean views, it’s also a low-key, eco-friendly way to experience each town while getting your cardio in.

Insider tip: Santa Monica has many bike rental shops but it’s best to avoid them on weekends when the bike path is at its most crowded. South of Torrance, serious bikers might continue uphill to the majestic, oceanview clifftops of the Palos Verdes Peninsula.

Malibu, where the Pacific Coast Highway parallels the shore for almost 30 miles, is storied for celebrity mansions, star-studded eateries, and some of Southern California’s best surf breaks. Even if you aren’t looking to hang ten, surfing is one of the most mesmerizing sports to watch. Closest to LA, Topanga State Beach gets south-facing swells. Surfrider Beach, near Malibu Pier, is credited as the birthplace of California surf culture, and its three breaks provide three different conditions. There’s also Zuma Beach which has Hollywood pedigree as the filming location for Baywatch (it’s also quieter, making it a welcome retreat for families).

Insider tip: Never surfed before? Multiple outfits can get you geared up and out on the water, but you’ll want a wetsuit—even in summer. The currents carry California’s waters down from Alaska, causing the temperature to drop lower than you might expect.

Spike it at Manhattan Beach 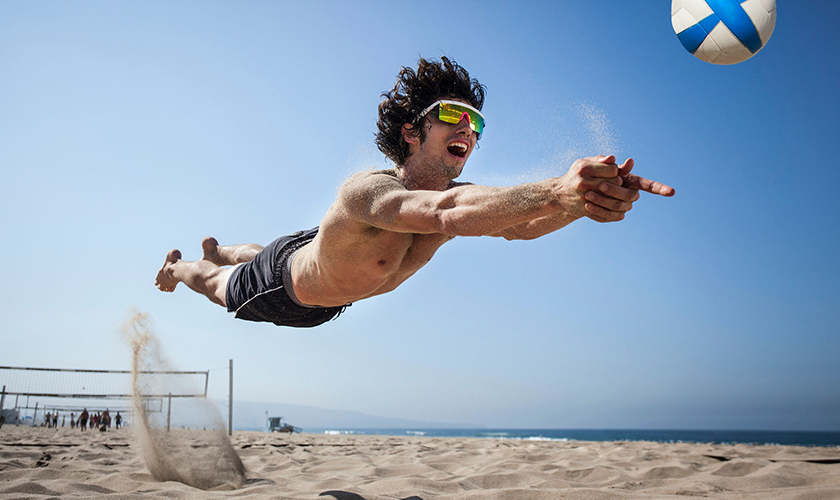 Beach volleyball is now an Olympic sport, and you can thank Manhattan Beach for that. No less than the AVP Manhattan Beach Open tournament got its start here way back in 1960 and is still going strong – winners are commemorated with plaques on the Manhattan Beach Pier. The beaches may not be as wide as in Santa Monica or Venice, but the hard-bodied volleyballers that seem to fill every court don’t seem to mind. The city even offers classes for kids, teens, and adults.

“Twenty-six miles across the sea,” as The Four Preps song about Santa Catalina Island goes, Catalina is a well-traveled day trip from LA’s southern ports and a world away from the city’s bustle. Nearly 88% of its 76 square miles is nature preserve and best explored through guided hikes (a hiking pass is required if you go on your own). Keep watch for local fauna: tiny foxes, giant squirrels and a bison herd are still thriving after being imported nearly 100 years ago for a film shoot. Adventures in the port town of Avalon include snorkeling, e-bike riding, kayaking, and zip-lining.

Insider tip: Tiny Avalon is a picturesque spot to put your feet up after your outdoor adventure. It’s filled with local restaurants and treat shops for you to enjoy. After all, you’re on vacation, right?